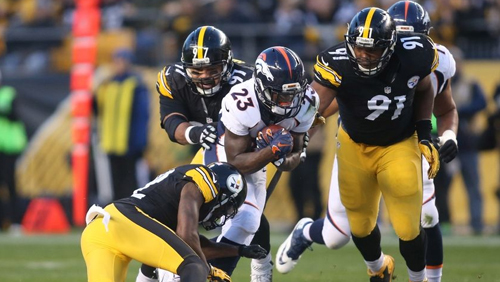 Winners 5 of their final 7 games of the season, the Denver Broncos are back to being 100 percent healthy which is bad news for the Pittsburgh Steelers as they beat the Broncos on December 20th 34 to 27 when Denver had to rely on their backup helmsman because Peyton Manning was on the mend from a few injuries that he sustained over the last 6 weeks of the regular season.

In last Saturday night’s victory versus the Cincinnati Bengals, the Pittsburgh Steelers may have regret that win due to the fact that their star wide receiver Antonio Brown suffered a concussion and is not likely to play this evening. In addition, quarterback Ben Roethlisberger injured his shoulder in that same game and is probable for this contest. However, with Antonio Brown not likely to participate in today’s matchup; the other pass catchers will have to step it against the number 1 rated defense versus wide outs that is only surrendering 199 yards a game and just 5.6 yards per catch. To add to “injury”, Steelers running back DeAngelo Williams is questionable for this encounter with an ankle injury and if he does play, he will face a hard-nosed run defense that limits the opposing ground eater to a stingy 83 rushing yards a game and 3.3 yards per tote. Note, Pittsburgh ran for a pathetic 23 yards thus making the Steelers one-demission which Pittsburgh won but that was with Antonio Brown and a healthy Ben Roethlisberger.

In the first meeting, the Denver Broncos displayed a well balanced offensive attack but the young backup helmsman threw picks and that was the difference in that particular game. Expect Peyton Manning to be health and to have fresh legs after resting up for 7 weeks as he will have a full compliment of wide receivers at his deposal along with a loaded backfield.