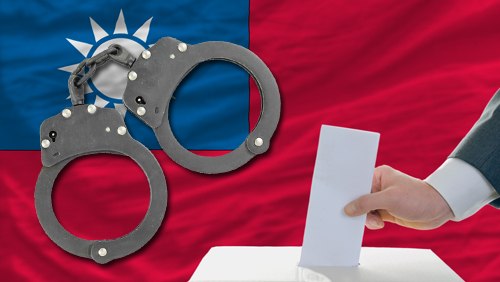 Forty-five people were arrested after Taiwanese authorities busted a gambling ring that netted more than $40 million in bets on the results of the upcoming elections in Taiwan.

At least 31 locations around the country were raided over the weekend, resulting in the arrests and NT$20.68 million cash seized, Focus Taiwan News Channel reported.

According to the report, the ring accepted NT$1.4 billion (US$42.36 million) in bets making it the largest and well-organized operation that authorities has shut down prior to the presidential and legislative elections on Jan. 16.

Betting records showed at least NT$1.4 billion were wagered on the upcoming elections.

Gambling operations is outlawed in Taiwan, except for the state-run Uniform Invoice lottery. In 2009, the Taiwanese government finally allowed the construction of casinos on the islands of Kinmen, Matsu and Penghu, though no casino has been built to date.

Penghu, however, is looking to change that with a referendum that will allow its residents to vote on possibly allowing a new casino to open in the island. The voting is expected to happen sometime between the country’s presidential election on Jan. 16 and before the May 20 presidential inauguration.

Meanwhile in Singapore, a 54-year-old man was charged in court over the use and possession of counterfeit casino chips.

According to The New Paper, Toh Hock Thiam is accused of heading a syndicate that distributes fake casino chips at the Marina Bay Sands casino in Singapore.

Toh was arrested in Malaysia on Dec. 31. Authorities found counterfeit casino chips worth more than US$1 million, mobile phones and cash in his possession, according to the news outlet.

A separate report from the Straits Times detailed how Toh set up a man, who, in turn, would recruit runners that will use the chips at the casino. Back in November, one of the runners used two chips worth $2,000 in total.