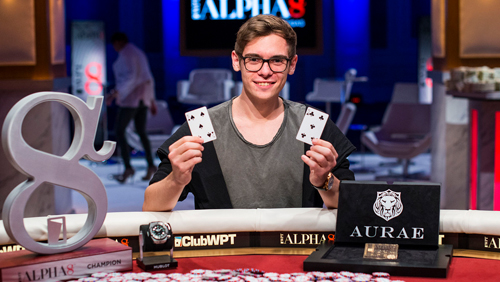 Fedor Holz punches another hole in the superstar poker player card with his first seven-figure score in a live poker tournament after taking down the World Poker Tour Alpha8 in Las Vegas.

The young German topped a 45-entrant field in the prestigious $100,000 buy-in World Poker Tour (WPT) Alpha8, at the Bellagio, Las Vegas. As you would expect, it’s his largest live score to date and his first major title.

What a rise through the ranks for young Holz. Three years ago he was popping up in $500 buy-in events. Today, he displays all of the gallantries of a young man capable of finding people falling over themselves to help support him in a six-figure buy-in event.

Holz started the final table of eight with a commanding chip lead, sitting down with 4,865,000 chips (representing 40% of the chips in play). However, he was facing a final table that contained two players who are bang in form in the shape of Daniel Negreanu and Nick Petrangelo.

Negreanu must have been smouldering at the thought of returning to the felt after a tough month trying to play Devil’s advocate between Dani Stern and PokerStars. He recently played out the final table of the PokerStars Shark Cage, beating Phil Ivey in heads-up action, to take the $966,000 first prize, and he picked up another $640,103 after finishing third in this one.

3rd place for $640k to finish off the year in style. Key hand was losing 66 to 88 and I only called cause I respected my opponents.

The hand that Negreanu refers to in his Tweet was Hand #77 of the final table. Negreanu opened the action with a raise to 135,000 on the button and then called when Nick Petrangelo moved all-in for 1,740,000 from the small blind.

Negreanu’s time at the final table nosedived from that point, but it catapulted Petrangelo into a heads-up confrontation with Holz. Petrangelo is one of the in-form players of the year, and currently ranks #4 in the Global Poker Index (GPI) Player of the Year rankings.

Holz started with more than a 2:1 chip lead and turned it into a victory 23-hands later. The German limped from the button and called a Petrangelo shove. Holz showed pocket fives; Petrangelo showed ace-queen, and the baby pair held up at showdown.

Next stop for Holz is the $200,000 buy-in WPT National Philippines Super High Roller.