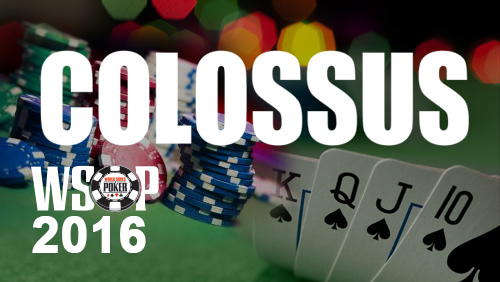 officials have made it known that the Colossus will return for the second year when the 2016 series begins, and the winner will be guaranteed a $1m payday.

The World Series of Poker (WSOP) shows that it listens to its customers after announcing plans to secure a million dollar first prize to the winner of the 2016 Colossus II.

“From the greatest tournament in the world to WTF in one-second.”

WSOP bracelet winner Ronnie Bardah tweeted that gem of line moments after WSOP Tournament Director (TD) Jack Effel announced the $638,880 first prize during Day 2 of the inaugural Colossus event. There was a public outcry that the winner wouldn’t get a million. It got worse when the cash desks couldn’t handle the depth of the payout lines, leaving customers both angry and frustrated.

A million bucks first prize appeases those dissenting voices. The WSOP are hoping that ensuring all players who survive Day 1 are in the money will also ease congestion. The $565 buy-in event is also re-entry meaning players have the option to cash multiple times before a single Day 2 card is flicked across the felt.

There is also an additional starting flight as WSOP officials prepare for what they anticipate could be another record-breaking tournament. The starting flights are June 2, 3 & 4, and if you think that’s early you are right. The Colossus II will be the first open event of the series meaning the first winner of a WSOP bracelet, outside of the Casino Employee’s Event, will be a millionaire.

Next year will be the 47th time the WSOP has existed. The Rio All-Suite Hotel & Casino, Las Vegas, are the hosts for the 12th consecutive year. There will be close to 500 tables to handle the action. 24-hour cash game action will begin May 31. Player’s will have the opportunity to qualify for live events playing on WSOP.com either in Nevada or New Jersey.

The Millionaire Maker, Monster Stack, Little One for ONE DROP, Seniors Event and Ladies Championship will all return for 2016. There is no mention of a return of the $1m buy-in event BIG ONE for ONE DROP, or a WSOP.com online event. Keep your hairy ears pinned back for further information in Jan & Feb 2016 when the rest of the 60+ event schedule will be made public.