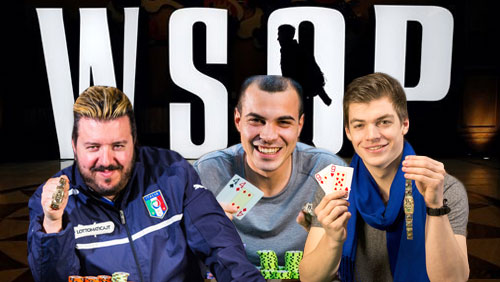 Lee Davy brings you up to speed on the main news stories coming from the eighth day of the 46th Annual World Series of Poker, including cheating allegations coming out of the $10,000 Heads-Up, and the first two bracelets for the Europeans.

The World Series of Poker’s (WSOP) reputation is being questioned like never before. Since the advent of social media the private view of the customer is now available for the world to see. There is a growing disgruntlement falling out of The Colossus. Everyone can feel it, and yesterday it took another blow to the mid section.

It all started with a simple tweet, after Connor Drinan was eliminated from Event #10: Heads-Up No-Limit Hold’em Championships by a relatively unknown player from Moldova called Valeriu Coca.

Bubbled the HU. Hands down strangest hour and a half of poker of my life. Felt super-used

Drinan didn’t leave it there. He spoke to some of Coca’s other opponent’s: Pratyush Buddiga, Matt Marafioti and Aaron Mermelstein who all confirmed they felt something unexplainable happened during their matches.

The upshot of various discussions is a suggestion that Coca could have cheated during his matches. The main theory is that Coca transferred ink onto Aces, Kings and Queens, and only he could see this ink through specially adapted sunglasses. All of his opponents have concurred that this is a possibility.

During the ensuing social media melee a news report surfaced, explaining how Coca had been caught cheating in a Prague casino, bending the corners of aces and kings, and using that information to win in cash games. He was eventually barred from those establishments.

Both Kaverman and WSOP officials were made aware of the allegations. The current GPI WSOP Player of the Year leader squared off against Coca in the quarterfinals, and subsequently lost the match. Keith Lehr beat Coca in the semi-final, by which time the scrutiny on Coca was extremely intense.

The WSOP responded as follows:

We are aware, monitoring very closely w/all resources at our disposal. Those include surveillance/security,forensic examination of cards, etc — Jack Effel (@WSOPTD) June 4, 2015

2/2 We take integrity very seriously, as evidenced by our lifetime bans, and would enjoy nothing more than catching a cheater in our midst.

They have also confirmed in a statement to CalvinAyre that “Preliminary testing of cards show no markings or use of any foreign solution.”

We will bring you further news on their investigations as it surfaces.

Keith Lehr, who has also faced allegations of past indiscretions on the felt, faces off against Paul Volpe for the first prize of $334,430.

The Colossus has been playing for so long I initially finished this round-up and forgot all about it.

After five days of action, 25-year old Cord Garcia has defeated 22,374 players, to capture the first prize of $638,880. Something tells me he won’t be complaining about the pay structure.

Despite being a World Series of Poker Circuit (WSOPC) gold ring winner, Garcia had never cashed in a WSOP event until this event. What a time to break his duck.

Here are some Colossus numbers for you:

• Players from 98 countries entered the event, a new WSOP record.

If you were to guess the name of the first European country to win a 2015 WSOP bracelet would you have chosen Germany?

I bet many of you would.

And you would have been on the money.

Michaelis and Marchese bullied the hell out of the final table, with both players responsible for every exit. The two were like chalk and cheese. Michaelis, who had recently earned a Bachelors degree in Media and Communication Management, was cashing in a WSOP event for only the second time in his life, and Marchese was sitting comfortably at his fourth final table.

Michaelis started the heads-up encounter with the chip lead. Marchese took a slight lead, only once in the match, but the German pulled away once more, before a stroke of luck eventually broke the camel’s back. Michaelis getting it in 99 v QQ only to hit a third nine on the turn to win the title.

WSOP bracelets for Europeans are like buses. You wait for ages for one, and then another one shows up immediately after.

Max Pescatori has become the first Italian to win three WSOP bracelets, after beating Ryan Miller, in heads-up action, to take the first Razz bracelet of the summer.

The 44-year old Milanese born Las Vegas resident topped a field of 462 players to win the top prize of $155,947. It was Pescatori’s 46th WSOP cash, 10th final table appearance, and third victory. He has never lost a WSOP heads-up match when the gold has been on the line.

“This is very sweet, that’s for sure. I’ve done good here, but nothing matches winning. I knew this game was strong for me, so I felt that this gave me a good chance to get my third in this one.” Pescatori told the WSOP after his win.

The numbers for Event #13: $2,500 Omaha/Seven Card Stud Hi-Lo 8 or Better, are pretty static year-on-year. John Kabbaj made the news when he turned a horrible year, into one mildly worth remembering, when he defeated 470 entrants on his way to victory. This year 474 players have entered and six-time bracelet winner Layne Flack is at the top of the chip counts with 72,100. Other players in contention, outside of the top 5 include: Mike Gorodinsky (47,300), Maria Ho (47,100) and Scott Clements (46,300).