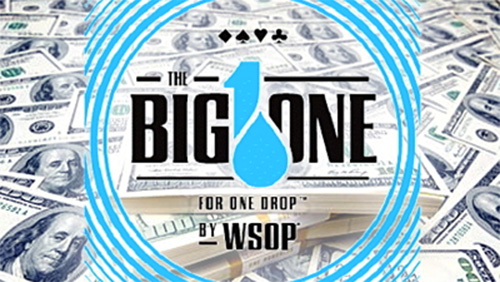 10-more players have found the $1m buy-in necessary to participate in the most lucrative poker tournament the world has ever seen, as Vanessa Selbst, Jean Robert-Bellande, Anthony Gregg, an unknown Asian businessman, and six of German’s finest, all stump up the cash.

How difficult is it to find the million necessary to play in the BIG ONE for ONE DROP?

Either Jean-Robert Bellande is telling us porky pies or it’s not as difficult as one first thought.

The man who has achieved notoriety for being continually broke, and having a poker game that struggles to gain respect, turned up the Rio in his personalized number plated Bentley to turn over $1m in cash at the Rio counter.

The case for ‘it’s not what you know, but whom you know,’ has never been more beautifully lived out than in the context of the life of BrokeLivingJRB.

“I’m so excited to be taking part in The BIG ONE for ONE DROP this year,” Selbst told the WSOP in a statement. “I didn’t get to play in 2012, but after seeing how much fun everyone had with the event as well as how profound an impact it had on ONE DROP, I knew I had to be a part of it this time around.”

That takes the up to date count to 33 reserved seats, with 23 up for grabs, and you can secure your own through the $25,300 Mega Satellite that last year saw Gus Hansen take the seat after striking a deal that saw Shaun Deeb take a million bucks away from the table.

The WSOP have also released the ESPN TV scheduling with the coverage being spread over three days, and condensed down to six hours, with the following timetable.

“With the unthinkable stakes of The BIG ONE for ONE DROP and its colorful mix of early committees, we are thrilled ESPN has embraced the opportunity to truly showcase a seminal moment for poker that just may yield the biggest first prize in sports television history,” said WSOP Executive Director Ty Stewart.

So who else do I anticipate joining the fray?

I think it’s almost certain that Daniel Negreanu will find his way into the mix, I expect Mike Sexton to once again find a backer big enough to participate, Phil Hellmuth will once again make a last gasp appearance, Timothy Adams told me that he was planning to participate, as did Daniel ‘Jungleman’ Cates.