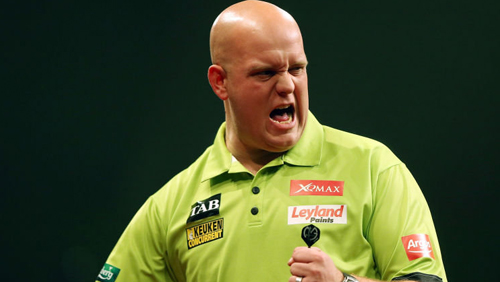 MAGNIFICENT Michael van Gerwen fought back from 10-7 down to claim an incredible 11-10 victory as he retained the Unibet European Championship title in a superb final at the Ethias Arena in Belgium on Sunday night.

World Champion Anderson had looked set to add the European Championship title to the Premier League and Players Championship Finals triumphs he has also claimed during the past year when he took a 10-7 lead over van Gerwen.

However, the Dutchman – who had earlier missed double 12 for a nine-dart finish in the final’s fourth leg – took the last four legs in incredible fashion as he edged out the Scot to claim glory.

Reigning champion van Gerwen had produced some of his best darts on the way to the final and missed double 12 to complete a nine-dart leg during the early stages of the decider.

Van Gerwen did hold a 4-3 advantage after breaking throw in leg seven with a 91 checkout, but Anderson found top gear with four 180s in as many legs as he turned the game around and took a 7-4 cushion.

The world number one hit a 107 finish as he fought back but Anderson edged towards victory as a 101 checkout moved him 10-7 up.

Van Gerwen, though, hit a 14-dart leg to keep his hopes alive and then repeated the feat, with the aid of a 180, to break throw and pull back to 10-9.

He then hit a ninth maximum of the final as a 13-dart finish forced a deciding leg, and when Anderson was unable to take out 134 the world number one pounced as a 75 checkout for another 14-darter gave him the title.

“Gary was playing fantastic darts and I couldn’t find a way to put him under pressure because his scoring power at the right moments was fantastic.

“I was waiting for a mistake and when you get a chance you need to take it with both hands, and that’s exactly what I did. I fought for everything but I still don’t know where that finish came from.

“Maybe I played the four best legs of my career under this pressure and I’m really happy with that. It’s fantastic to win a tournament like this in that way.”

The £300,000 is the first major title which van Gerwen has successfully defended throughout his career, and extends his lead at the head of the world rankings with the £65,000 first prize.

“I’d not retained a title before and I’m really pleased,” he added. “To retain the title in front of a crowd which includes so many Dutchmen is great.

“I’m so happy with how everything is going at the moment and this was a fantastic win.”

Anderson had produced some sublime darts himself throughout the weekend, notably as he followed up a quarter-final defeat of Jelle Klaasen with an 11-5 win over Adrian Lewis in the semi-finals which included a ten-dart finish.

However, the world number two was left to rue a defeat to van Gerwen – and though he averaged over 102 and hit eight 180s in the decider he never had a dart for the title.

“It was there for the taking,” he conceded. “I threw that away but Michael came back well.

“I’ll forget about this by tomorrow and prepare for the Grand Slam in Wolverhampton next week and I’m looking forward to playing back in Glasgow too later in November.”

The night proved agonising for world number four Peter Wright, who came back from 5-0 down in his semi-final against van Gerwen to trail just 8-7 only to waste his chance to level when he twice missed a single number, denying himself a dart at a double.

“I mentor young Nathan Derry on the circuit and tell him all the time that the big single number is the most important number and the one you concentrate on, and I didn’t there tonight,” conceded Wright.

“It should have been eight-all and it might have been a different story, but I’m happy with reaching the semi-finals. The darts are starting to work for me now and with a bit more work I’ll be ready for the next tournament.

“Michael played well there and I enjoyed the game. You’ve got to play well against the number one player in the world and in those first five legs I should have won them and didn’t and I was chasing the game after that.”

The Unibet European Championship was the PDC’s first major televised event to be held in Belgium and attracted over 10,000 fans to the Ethias Arena in Hasselt throughout the three days.

The next major PDC event is the SINGHA Beer Grand Slam of Darts, which will be held from November 7-15 at the Wolverhampton Civic Hall.

MATCH INFORMATION
SEMI-FINALS
Michael van Gerwen v Peter Wright
1-0 – Wright lands an early 180, but misses the bull to claim the opening leg as van Gerwen takes out double 14 for a 13-darter.
2-0 – van Gerwen fires in a 177 score before taking out 136 for a brilliant 12-dart finish.
3-0 – Another miss from Wright allows van Gerwen in to finish double five for a three-leg lead.
4-0 – Wright misses double 13, and van Gerwen takes out 80 on tops to break throw again and move four legs up.
5-0 – Wright is once again unable to land the bullseye, and van Gerwen hits a third-dart double eight to claim a five-leg cushion. Van Gerwen is currently averaging 112.62 to Wright’s 107.36.
5-1 – Wright hits a 180 and finishes double four to win his first leg of the game.
6-1 – Double 12 gives van Gerwen his five-leg lead once again.
7-1 – van Gerwen moves six legs clear with the aid of another 180 and tops.
8-1 – van Gerwen’s second maximum opens the leg before he finishes double eight for a 14-darter.
8-2 – Double eight gives Wright his second leg of the game.
8-3 – Wright fires in his third 180 before finishing double 16 to break throw for the first time in the game.
8-4 – A 70 finish sees Wright claim a third successive leg.
8-5 – Wright’s revival continues as he lands his fourth 180 before punishing van Gerwen’s miss at tops by finishing double ten.
8-6 – Wright’s fifth 180 is followed by double 12 as he claims a fifth straight leg to cut the gap to two.
8-7 – van Gerwen opens with a 180, but misses darts at double top, ten and five to allow Wright in on double 16, as the world number four moves to within touching distance of his opponent.
9-7 – Both players hit 180s in a potentially pivotal leg – with Wright leave 56 to level the game only two twice miss a single number to leave a double, allowing van Gerwen in on tops to win his first leg in seven.
10-7 – van Gerwen opens with a 180, and though Wright replies with a maximum he is unable to stop the Dutchman finishing an 11-darter on tops to move to the brink of victory.
11-7 – van Gerwen kicks off with six perfect darts, hitting two 180s, before Wright lands an eighth maximum, but the world number one bounces back from missing out on a possible nine-darter to hit double ten for the win and a place in the final.

Gary Anderson v Adrian Lewis
0-1 – Lewis takes out a superb 149 checkout to claim the opening leg.
0-2 – Anderson misses three darts at doubles, and Lewis capitalises with double 18 to break throw.
1-2 – Anderson finishes 116 on tops to get off the mark.
2-2 – The World Champion now takes out 113 on double top to level the game.
3-2 – Anderson lands a 171 score then hits double 14 to move ahead for the first time.
4-2 – Double 12 sees Anderson take a fourth straight leg.
5-2 – Lewis misses tops, and Anderson capitalises on double ten.
6-2 – Anderson fires in two 180s and tops for a 12-darter.
6-3 – Lewis lands double four to take his first leg in seven.
7-3 – Anderson hits a 180 as he regains his four-leg lead.
7-4 – Anderson’s miss at tops allows Lewis in on double eight to hit back.
8-4 – Anderson opens with two 180s before Lewis replies with his first maximum of the game, and though the Scot is unable to complete a nine-darter he returns to win the leg in ten darts.
9-4 – Lewis adds another maximum, but misses tops as Anderson steps in on double 12.
9-5 – Lewis finishes 66 on double 18 to respond.
10-5 – Lewis hits his third 180, but Anderson finishes 121 on double 14 to move to the brink of the win.
11-5 – Anderson hits his seventh 180 before sealing victory with an average of over 106 to set up a tasty final against Michael van Gerwen.

FINAL
Michael van Gerwen v Gary Anderson
0-1 – van Gerwen hits the final’s first 180, but misses three darts across two visits to win the opening leg as Anderson capitalises on tops.
1-1 – A 76 finish sees van Gerwen level.
1-2 – Tops gives Anderson the edge once again.
2-2 – MICHAEL VAN GERWEN MISSES DOUBLE 12 FOR A NINE-DARTER. The Dutchman opens with two 180s and hits another treble 20 and the treble 19 of the 141 combination, only to miss double 12 just inside the wire – but he returns to hit double six for a ten-dart finish.
2-3 – van Gerwen posts a 174, but Anderson finishes 72 on tops to hold throw.
3-3 – van Gerwen lands a 180 and double nine to level.
4-3 – The Dutchman breaks throw, with both players hitting 180s only for Anderson’s two missed doubles to allow van Gerwen to finish 91 to move ahead.
4-4 – Anderson hits back immediately by hitting two 180s in the leg before finishing 85 for a 12-darter.
4-5 – Anderson opens with a 180 and hits double seven to regain his lead.
4-6 – Both players open with 180s, with van Gerwen missing a dart at tops to allow Anderson in, and a third-dart double top sees him break once again for a two-leg lead.
4-7 – van Gerwen hits his seventh 180, but misses tops to take out 82 and Anderson finishes double 18 to win his third successive leg.
5-7 – Anderson lands his seventh maximum, but is unable to take out 96 to allow van Gerwen in for a 71 checkout as he wins his first leg in five.
5-8 – Tops sees Anderson move three legs away from the title.
6-8 – van Gerwen takes out 107 on double 16 to reduce the gap to two legs once again – but he still requires a break of throw to give him the chance to draw level.
6-9 – Anderson hits his eighth 180 before finishing double eight for a 14-dart finish.
7-9 – van Gerwen lands double eight to respond with the throw.
7-10 – Anderson finishes 101 on double 19 to move a leg away from the title.
8-10 – van Gerwen hits a 170 score during the leg and finishes 78 on double 12 to stay in the game.
9-10 – van Gerwen fires in a key 180 as he finally breaks throw with a 62 finish on double 16.
10-10 – van Gerwen’s ninth 180 is followed by double 16 as he sends the final into a deciding leg.
11-10 – Anderson is unable to take out 134, and van Gerwen completes his fightback by finishing 75 on double 12 to seal a brilliant victory and retain the title.