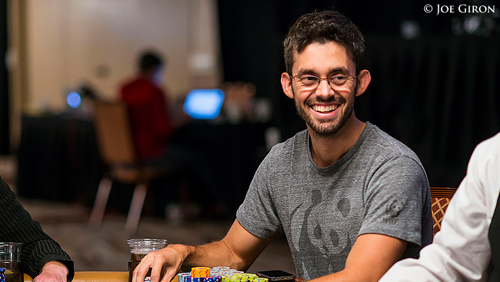 Mike Gorodinsky sees off a late surge by Jonathan Duhamel to lock up the 2015 World Series of Poker Player of the Year award, with the Main Event still to play.

Mike Gorodinsky has joined an elite band of 10-men crowned King of the World Series of Poker (WSOP). He held off a late challenge from Jonathan Duhamel to win the 2015 WSOP Player of the Year (POY) award in Berlin.

Gorodinsky traveled to the German capital, for the World Series of Poker Europe (WSOPE) festival, at the head of a ravenous chasing pack. It wasn’t a roof-raising trip, but it’s getting over the finish line that matters.

#POYhunted.. Not my finest performance at WSOPE, but at least I retain the honor! Thanks for the support everyone 🙂

It was a time of change for the WSOP POY format. The Global Poker Index (GPI) were chosen to replace BLUFF as the engine that runs the show. It was a decision that didn’t meet with universal approval, and when you look at the performances of Gorodinsky and the runner-up Duhamel it’s easy to see why.

Gorodinsky cashed in eight events, made three final tables, won one bracelet and earned $1,766,828 in prize money. He finished runner-up to Phil Hellmuth in the $10,000 Seven Card Razz Championship for $167,517. He was third behind Jason Mercier and Simon Deadman in the $5,000 No-Limit Hold’em Six-Max for $246,867. His bracelet victory came in the $50,000 The Players Championship where he beat Jean-Robert Bellande heads-up to claim the $1,270,086 first prize. He now has two WSOP bracelets in a dusty draw somewhere.

In the end, the margin of victory was 77.17 points, making Gorodinsky’s 42nd place finish in Event: #8 €1,100 No-Limit Hold’em Turbo event, critical, as he was awarded 94.62 points for that finish according to data provided on the Hendon Mob website.

Was Gorodinsky happy with the win?

But nothing could top being reunited with his best buddy.

Berlin is a beautiful city and WSOPE was a cool experience but it all pales in comparison to coming home to this. pic.twitter.com/bj6LgOVAl8 — Mike Gorodinsky (@gordoMG) October 25, 2015

*Ismael Bojang was the only player to feature in the Top 10 for the second successive year. He finished seventh in 2014.