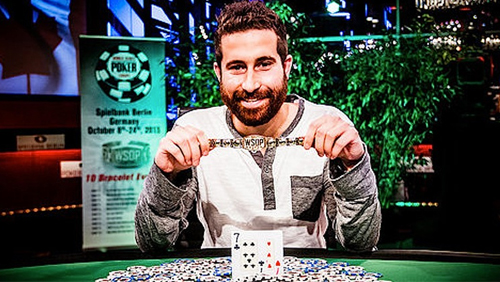 Jonathan Duhamel has won his third career bracelet after topping a field of 64-entrants in the €25,600 World Series of Poker Europe Main Event.

Duhamel’s victory pushes him ahead of John Juanhighda in the Hendon Mob All Time Money charts with $17.5m. Only Brian Rast and Scott Seiver have won more in 2015. Duhamel also made the final table of Event #5: €2,200 Mixed Event finishing fourth for €21,065.

As you would expect in a €25,600 buy-in event, the field was a tough one, and the final table was tougher still. Mustapha Kanit started the final table with the chip lead, and only Davidi Kitai held fewer chips than Duhamel.

The 2014 World Championships of Online Poker (WCCOP) champion was the first player eliminated. According to the WSOP Live Updates team, Fedor Holz put the last of his chips into play holding [Ts] [9h] and Duhamel picked him apart with [Ad] [7s].

The second player ejected from the tournament was the only German to make the final.

Christian Vogelsang has played in the biggest games in the world including a third place finish in the 2014 WSOP Big One for One Drop. Vogelsang raised with [Kc] [Tc], Kanit called in the big blind with [Js] [9d] and then check-raising all-in on a flop of [Td] [7s] [6d]. Vogelsang made the call, and was ahead, until the [8h] on the turn handed the Italian the straight, leaving Vogelsang drawing dead.

Sam Chartier was the next to go when he moved all-in holding [Kc] [6c], only for Kanit to call, and eliminate him, holding pocket tens. A fourth place finish for Chartier the same as his recent fourth place finish in Event #6 €3,250 No-Limit Hold’em; a fruitful and frustrating festival for the French-Canadian.

Kanit may have busted players five and four, but he would be the next one leaving the table. He moved all-in, from the small blind, holding [Qh] [5s], and Duhamel called in the big blind holding [Ac] [Jd]. Ace high good enough for the win, and the tournament had reached heads-up.

The heads-up phase saw Duhamel searching for his third bracelet, against a player that already owns three. Davidi Kitai is one of the best players in the business, and with the pair starting even in chips everything was set for an exciting finale.

Both Kitai and Duhamel are very aggressive players. The WSOP Live Updates page painted a picture of a ‘take no prisoners’ start from both of them. This one was not going to be War and Peace.

Duhamel always seemed to have the upper hand, and would eventually pull away from the Belgian. He took the title after Kitai jammed, holding [Jh] [7s], and Duhamel called holding pocket sevens. The Jack stayed sealed in the box, and Duhamel joined his opponent on bracelet number three.

What is it like to win a third bracelet?

It seems it takes a little time to settle in.

At the airport in #Berlin and I’m starting to realize I just won my 3rd bracelet…holy sh*t!!!! This can’t be real @WSOP