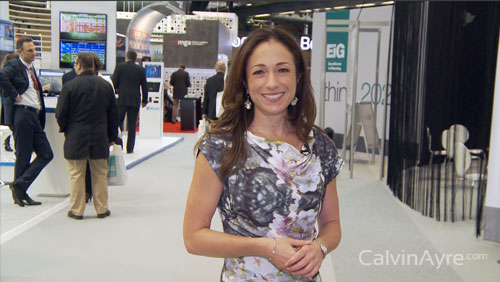 The third day of EiG was quieter than day one and two as always, not a surprise seeing as it’s the last day and the evening before was the official EiG party sponsored by SafeCharge.

What we do love about day three of EiG is determining which start-up will be crowned the EiG Launch Pad winner and finding out who is chosen by delegates as the EiG Pitch winner.

Despite its position on the schedule, the EiG Launch Pad is one of the most anticipated events of the conference.  Melissa Blau of iGaming Capital and Ewa Bakun of Clarion work together to choose five start-ups for the competition and Blau puts in a lot of time and effort prepping those start-ups for the big day at EiG.

Each start-up is granted 15 minutes to present their product to a panel of seasoned gambling industry venture capitalists; this year group included:

This year the five start-ups included:

1) DupZapper: An online fraud solution for detecting things like players with multiple accounts or using false identities, presented by their founder Pavel Titov.

2) Stratagem Technologies: A financial technology targeted to professional sports traders and investors looking for an edge, presented by their founder & CEO Andreas Koukorinis.

At the conclusion of the presentations, the audience voted for their favorite start-up and before the votes were tallied, each judge revealed their pick along with the reasoning behind it.  What was truly impressive about this year’s Launch Pad is how each judge commended the outstanding quality of the start-up companies participating.

“This is the highest standard I’ve ever been involved in, it’s great to see real innovation in games.  That’s fantastic”, said Blandford.  Hoff added, “This is my fifth year on the panel, for sure the best set of applications we’ve ever seen”.  Hogg agreed and said it’s the best he’s seen as a group.

Another positive element of this year’s Launch Pad was pointed out by Blau:  Burton of eSportsPools.com was the first person to present for the second time at one of the Clarion Launch Pad events, the first being GiGse 2015 in San Francisco.  Blau advised start-ups to apply more than once if they are not initially chosen for the event or if they miss the crown the first time because the journey of a new company is always evolving.

At the conclusion of the event, although it was a difficult decision for the judges, Blandford, Patouillaud and Hoff chose Strategem, Bonello and Hogg chose Casino VR and Costello chose eSportsPools.com.  However, the audience vote determined Casino VR as the winner, so a big congratulations to Kobelt and his team for a job well done.

Over at the EiG Pitch stage, SatoshiPay, a company enabling Bitcoin nanopayments, was announced as the winner.  CalvinAyre.com spoke with SatoshiPay Founder Meinhard Benn about the win. Benn was both surprised and delighted to win the Pitch, claiming the title will help his organization get a foot in the door with iGaming companies.

The ad-blocking buzz (and fear) around the release of Apple’s iOS 9 system has led some to believe publishers will have to go behind a pay wall in order to stay in business.  However, consumers are used to free content and might not be willing to pay hefty membership fees to access one article, for example, Benn said this was an opportunity for a company like SatoshiPay as it allows the consumer to easily pay for one article or even one paragraph.

Benn shared with CalvinAyre.com his organization will be moving beyond Bitcoin payments in the future so those who would rather use more traditional payment methods can utilize the service.

Before wrapping up, we caught the last panel, “The big transition”, featuring Ory Weihs of XL Media, Andy Lulham of OddsChecker, Yancy Naughton, of HasTraffic.com & WantsTraffic.com and moderated by Paul McNea of iGaming Performance.

The panel examined strategies for iGaming affiliates to remain successful as the market becomes more competitive.  The main themes included developing a more holistic offering as opposed to focusing on acquisition only and the importance of personalization and customization.

Lulham used the example of how OddsChecker has recently started offering tips, advice and co-branded betslips to their members, allowing members to bet within the site.  He added segmentation is something OddsChecker has traditionally struggled with, but now the ability to segment is there due to advanced tracking, allowing OddsChecker “to adopt a communication strategy that is truly contextual and personalized”.

Looking back on the past three days, EiG has been a fun, pleasant and successful experience.  While the numbers were not overwhelming, that’s not the purpose of the event- it’s meant to attract a more intimate crowd of decision-makers, allowing for quality sessions and easy networking.  The coordination and overlap between EiG and BAC this year was also appreciated, a welcomed new feature of this year’s event.

Overall, a job well done by Clarion and we are most certainly looking forward to next year.