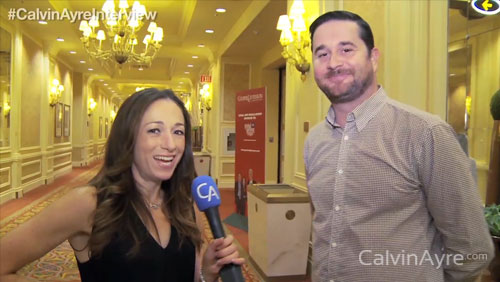 The EiG Launch Pad takes place today and one of the five start-ups chosen as finalists will be crowned the winner.  eSportsPools.com is one of the five, a company marrying eSports with daily fantasy, two hot sectors wrapped up into one.

Scott Burton is the CEO of eSportsPools.com and the growth of his fledgling organization has skyrocketed in the last six months.  While we were both attending G2E Vegas several weeks back, Burton elaborated on the crossover between eSports and DFS, the explosive growth of the eSports sector, what regulation would bring to DFS and how it would impact his company.

Becky Liggero: So lets start today by you telling me what sort of interest you’re seeing in these two industries being brought together like this.

Scott Burton: Its actually been overwhelming the last six months. So we started in the traditional sports betting world, last year we were approached to look at eSports and got very interested, we have a team of gamers.

We also like the fantasy space- I love the model but didn’t like the space for the fact there’s two giants in there right now.  We had a bit of a platform ready to go, but just didn’t want to tackle the traditional sports world.

That’s when we looked at the two and said lets try this and see if eSports fans would grab on to a product like fantasy and we very quickly realized they did extremely fast, so we put all of our efforts into creating the site that we have.

We have other products coming soon in the eSports world, but fantasy is where we’ve begun and you can see from these conferences now that everybody’s talking about it and even six months ago we weren’t getting approached by anybody.

BL: Ya, that’s really interesting.  I know DFS are absolutely gigantic in America, especially around the NFL season, but from your perspective in your company, where is all your traffic coming from, where are your customers?

SB: They are all over the world.  There’s a lot of great things about being in the eSports space, demographic is one, but the fact that eSports is truly global, is surpassing most traditional sports right now, its going to be bigger than all the North American sports in two years.  But for us, our primary customer base started out in Eastern Europe, that’s our biggest space- Scandinavia is really big- the US is still our second biggest market though.

We now have users from 132 countries, we’ve got the site translated into seven languages and its really a function of game as well.  We started out with a game called ‘Counter Strike’ which has a pretty active community that is interested in things that resemble betting, which is why we chose that to start and that just fits where the game is played, mostly.  We have now recently added League of Legends and DOTA2 so now we’re seeing the Asian markets really pick up.

BL: Right. I know you say its going to be bigger than all the American sports in a few years, can you elaborate on that statistic because some people say its an exaggeration, what exactly do you mean by that number?

SB: I mean that even two years ago the League of Legends World Championship Finals had 32 million viewers.  You compare that to any major league sport except the NFL and Super Bowl, it beats the NHL finals, beats Major League World Series, the NCAA final four, so viewership is there.  You look at Twitch stats, I think its well over 120 million unique visitors a month consuming something like 45 hours a month. Its already competing with what you see in the NFL and what people are watching with the statistics.

BL: Wow.  Big, big numbers there.  So we have regulation, especially with DFS, its been a big topic recently- how would regulation of DFS impact your business?

SB: It obviously impacted in the US, but for us, we came from a regulated background, so we actually don’t fear it and we expect it.  We’ve been licensed before, we’ve built licensed products and we’re ready to go that way again because we expect it, so its in our plans that its going to come, so we’ve always accounted for that. We can already do all the KYC, we can do money handling around the world, so I don’t know if its inevitable but we plan for the fact that it is.

BL: Sounds like you’re really prepared.  Anything else that you wanted to add today, Scott?

SB: We will be at EiG in Berlin presenting, we’re one of the Launch Pad Start-ups to watch, so if you didn’t see me here at G2E, then come see us over at our EiG booth over in Berlin.

BL: Excellent. Well the best of luck with that Launch Pad and we’ll see you there.  Thank you, Scott.