This is a guest contribution by William Hoyle, Strategic Analyst for StickyEye. If you would like to submit a contribution please contact Bill Beatty for submission details. Thank you.

Major online bingo brands could be losing as much as 56% of their non-brand organic traffic in a year, as smaller operators steal visibility from established operators according to recent research from digital marketing agency Stickyeyes (http://www.stickyeyes.com/).

Over the course of 2015, a number of lesser-known bingo operators and low domain-authority websites have risen to prominence in the online bingo search results. This has come at the expense of established online brands, including Sky Bingo and Cheeky Bingo, as well the online operators of the bricks-and-mortar brand, Mecca Bingo.

A very competitive SERP
Using their proprietary organic ranking tool, Roadmap (http://www.stickyeyes.com/products/roadmap/), Stickyeyes analysed the top 100 ranking websites across 319 online bingo market keywords. These keywords generate 240,780 monthly searches in the UK (30% of which come from the terms “bingo” and “online bingo”) and a maximum potential organic traffic of 58,100 visits per month (based on a website ranking in first position for all keywords).

This tool assesses how prominently a domain ranks, and across how many keywords it ranks, to determine the site’s visibility. The team then apply a typical click-through rate to provide an estimated traffic level based on that level of visibility.

This analysis of the bingo SERPs in August 2014 showed a very clustered and competitive bingo market, dominated by established brands. Foxy Bingo were the leading brand in this market by number of clicks, although these were being driven by a relatively low number of keywords. The brand occupied the first and second positions for the key terms “bingo” and “online bingo”, which are responsible for driving the bulk of organic traffic.

After Booty Bingo, the second most visible brand in this market, there is an extremely competitive cluster of brands. These brands, including Cheeky Bingo, Sky Bingo, Comfy Bingo and Little Miss Bingo, are all tightly clustered, earning similar levels of traffic from similar numbers of keywords.

The rise of low-DA sites, and fall of big brands
Where 2014 was an incredibly tight online search market, 2015 is very different. Whilst we can still see Foxy Bingo and Booty Bingo dominating the visibility in this sector, this is over a greater number of keywords. Foxy Bingo has actually grown its traffic by 35% over the course of the year, whilst Booty Bingo has grown by 26%.

Foxy Bingo’s increase in traffic can be attributed to the fact they have achieved 26 number one positions, compared to just six twelve months prior. This includes number one rankings for notable high volume terms, including “online bingo”, “bingo online” and “bingo sites uk”.

Similarly, Booty Bingo enjoyed and increased number of position one rankings, from 29 to 67. However, these are predominantly lower volume terms, 32 of which have a search volume below 100 searches a month. 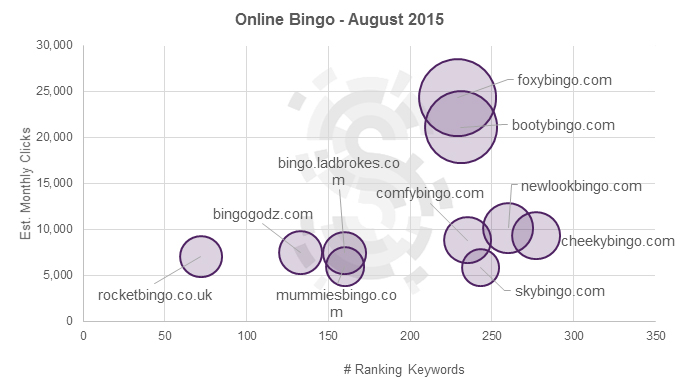 FoxyBingo.com and BootyBingo.com improving their keyword footprints, both brands do not demonstrate any visibility for over 25% of keywords, highlighting further potential traffic growth with the right strategy moving forward. Foxy Bingo in particular are not present for a number of “no deposit” related keyword terms, although this is reflective of their service offering.

But below these two brands, we see a much wider gap in brand visibility as a large number of lesser-known, lower domain authority sites (typically defined as having a DA of 30 or lower) enter the market. These brands are attracting traffic, largely at the expense of the more established operators.

We see Rocket Bingo achieving similar levels of traffic as the remaining brands in the top ten, but from a much smaller range of keywords, predominantly caused by a position one ranking for high volume term “bingo sites”. Whilst brands such as Cheeky Bingo are driving smaller volumes of traffic from a greater number of keywords, the brand has seen a ranking drop for the highest volume term “bingo”, falling from position two to four, which will adversely affect click through rates.

Is mobile a factor?
The impact of “mobilegeddon” in April 2015 was somewhat of an anti-climax, but there are signs that mobile friendliness could be a factor in these changes.

Stickyeyes analysis, supported by the findings of their whitepaper on mobile strategies for the gambling industry, found signs that smaller operators have built sites with mobile usability in mind and, as a result, they all score extremely highly in Google’s own Page Speed Insights Tool, which scores mobile user experience. In many cases, these scores are higher than the more established brands.

Google is on record as putting an emphasis on mobile usability, so mobile UX scores could be a factor.

The appeal of the free bonus offer
Another common factor amongst the lesser-known operators, which may explain their growth, is the prominence of “free bingo” or bonus offers in their new customer proposition. These can be seen to be a defining feature in a market where, in general, brands tend to achieve similar technical standards for mobile friendliness and HTTPS protocols.

While the larger, traditional brands tend to offer some form of deposit bonus for new customers, none of these appear to match the free (as in “no deposit required”) bingo being offered by the smaller brands. These offers include:

These propositions may be incentivising customers, leading to higher click-through rates, which may influencing the search rankings.

These lower DA domains were noticeable in the analysis in August 2014, and did occupy strong positions, but not enough to appear in the top ten. But whilst Stickyeyes largely expected many of these sites to lose visibility rather quickly, as has happened in sectors such as the pay day loans market, it would appear that they are actually gaining prominence in the search engine results pages.

William Hoyle, Strategic for Stickyeyes, an online marketing agency based in the UK.