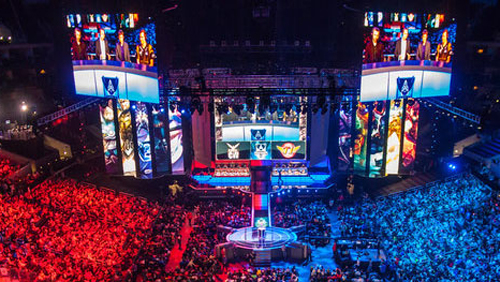 This is a guest contribution by Mark McGuiness, founder of eSports Bet. If you would like to submit a contribution please contact Bill Beatty for submission details. Thank you.

Betting on eSports continues to grab the media spotlight, with more and more iGaming operators clamouring to offer eSports betting products on their platforms. Could eSports disrupt the current online betting industry that hasn’t changed in the past 15 years? Industry eSports betting consultant Mark McGuinness explains.

Competitive video gaming isn’t a new phenomenon. If anything video gaming has done a lot of ‘pivoting’ as they would refer to it in Venture Capital, speak.   In the early 1980’s the iconic Space Invaders held the 1st large-scale video game competition for 10,000 players in the USA. Fast forward to the early nineties and advancement in technology allowed true online multiplayer capabilities.  This was perhaps the birth of eSports, transforming the stereotypical image of a computer nerd, eating pizza and whiling away a misspent youth in his bedroom in solitude to one of a digital eSports athlete.

The key takeaway here is the multiplayer feature, not only provided the platform to compete but the ability for socialization.  The concept of being able to share the same interests and beliefs has resulted in vast eSports communities numbering in the tens to hundreds of millions around one particular video game franchise.

Why should you iGaming operators take notice?

Firstly video gaming pervades every facet of our digital and connected lives. It lurks in our smartphone and smartwatch, our home either as a games console or browser based app on your smart television. It infiltrates the workplace and in some European countries is being introduced into the primary schooling system.  If you look at the USA, 155 million Americans play video games, which is 3.5 times bigger than the fantasy sports market base of 40 million! League of Legends, the world’s most popular eSports franchise, has a community of some 67 million players, playing every month. It is, therefore, a central digital entertainment experience and economy built around social communities.

Why eSports can disrupt

ESports has the potential to disrupt the mainstream, online gambling industry which hasn’t really transformed or succumbed to disruption, or the decentralised internet like other industries.

Firstly eSports is built around vast community-based platforms, where players can compete, socialize, engage in live chat and broadcast that experience through live video streams.  On the flip-side, current gambling models have little to zero socialization and could be defined as a solitary activity. Think about placing an online sports bet, it’s just you versus the operator in a very sanitized and unengaging experience, no live chat, no personal video stream, no sharing of your personal progress. Likewise playing slots or table games are further examples devoid of community entertainment for this Millennial demographic.

If you believe community isn’t central to the eSports betting experience, you may rethink this. Unikrn, a pure-play eSports betting site which is not even a year old, has amassed 7 million players. That is the power of a community based gambling entertainment offering.

Within the eSports ecosystem, gambling services are already well-developed. Skin gambling or skin trading has given rise to huge eBay style marketplaces. These platforms like CS: GO Lounge provides the ability to buy and sell digital items such as knives, guns related to the game Counter Strike. They generate millions of dollars in betting trades per day.  Furthermore Riot, the publisher of League of Legends, is forecast to make around $1billion in revenue from these so-called micro-transactions on digital goods related to the in-game play.

The online gambling industry has been slow to embrace other alternative value exchange models such as Bitcoin and other forms of digital currency.  If it doesn’t embrace what the eSports demographic is already engaging with, then their business may miss out on the opportunity to acquire millions of potential new customers.

The connected generation wishes instant gratification, social giving and the community at the heart of their digital entertainment experience, which could mean traditional sports books may just have to rethink their business models to win over this new digital consumer.

Esports is more than just a fad as some industry observers have mooted. It is as much a digital experience as a real-world experience. It’s both digital entertainment and gambling opportunity. It has the potential to reach millions of new customers for mainstream online gaming operators.