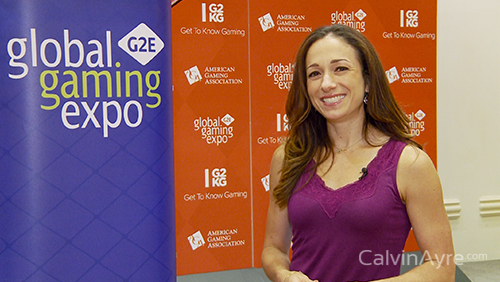 G2E 2015 kicked off today in Las Vegas, the largest event of the year servicing the global gambling industry, with an emphasis on the huge industry here in America.

This event attracts thousands of delegates eager to network and explore an enormous floor space full of the most elaborate booths this industry will ever see.

The Global Gaming Awards are produced by Gambling Insider and today’s awards luncheon kicked off the start to four days of G2E madness.

NYX were the main sponsors of the awards and David Johnson told CalvinAyre.com these awards are the perfect way to ease into the biggest event of the year.  NYX’s sponsorship of the awards provided an opportunity for Johnson to invite delegates to their booth when the expo opens for an intro to new products on tap.

Winners of this year’s Gambling Insider Awards are as follows:

Land Based Gaming Innovation of the Year: Powerbucks, IGT

Land Based Operator of the Year: MGM Resorts International

DIgital Operator of the Year: Bet365

Day one of G2E also hosted the iGaming Congress, a series of sessions dedicated to educating delegates on the opportunities in online gambling within America and beyond.

The biggest challenges with entering the regulated US market were covered and according to Capra, “understanding the overall size of the market has been a challenge” and iGaming operators “have to have a long term outlook in order to make it worthwhile”.

For anyone entering the New Jersey market, or any regulated US market for that matter, having multiple platforms and top of the line platforms are of upmost importance, something Ultimate Poker did not have and some think eventually pushed them out of the market even though they were the first to enter.

The imminent entrance of the PokerStars brand into the regulated US market was discussed and Pascrell welcomes their entry as new players and platforms coming into the market will help grow it.  He said 60% of adults over the age of 21 in New Jersey still do not know iGaming is legal within the state’s borders and Stars’ entry will help spread the word.

“Stars will bring more competition into the market, it will grow the market and we need to have the domino effect accelerated”, Pascrell said.

In terms of the competing with Stars should they enter the regulated US market Capra said on behalf of 888, “It will depend how they come out of the box, what the message will be and who they are targeting the message to”.

Capra explained there are demographics 888 is not even touching in New Jersey so Stars’ message and target will make a big difference in how the market share pans out.

The exponential growth of DFS in the US was mentioned as well, an industry that is currently unregulated in America but also regarded as a legal activity.

Blau said if we can get regulatory clarity around DFS, the B&M casinos could stand next to them and the two working together would be powerful and similar to how things work in Europe.  She said “it’s a much better ecosystem if you can add a sports product to your casino”.

Blume confirmed eSports is the seventh biggest sport for Pinnacle and said, “eSports is huge and is growing at a rate that is unprecedented”.  He added eSports are the only 365, 24/7 sports available today.

An interesting point made during the panel is regular people can relate to professional eSports players as opposed to other types of professional athletes – they think, “How hard could it be? That could be me!”  Schneider agreed and mentioned the Chris Moneymaker phenomenon for poker and how similar these two industries could be when it comes to gaining enthusiasts and popularity.