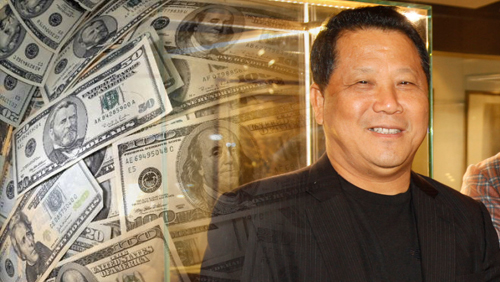 Las Vegas Sand’s alleged link man to Chinese Government has been arrested for smuggling more than $4.5m cash to the United States in over a two-year period.

Ng Lap Seng has been arrested in New York on Saturday and were accused on Monday in federal court in Manhattan of repeatedly engaging in a conspiracy to obstruct and make false statements to US customs officials.

According to FBI investigations, In June 2014, Ng landed in New York with a $400,000 cash and told customs officials that the money was intended to purchase paintings and to gamble in Las Vegas casinos.

At a hearing on Saturday, U.S. prosecutor Daniel Richenthal said that according to transcript, Yin told authorities after his arrest that the money was used to pay people “to engage in unlawful activities.”

Sabrina Shroff, Yin’s lawyer, disputed that account and said the case was a “misunderstanding.”

An FBI agent also recounted serving a subpoena on Ng, which he did not respond to, July 2014 in connection to lawsuit filed by Steve Jacobs against billionaire Sheldon Adelson’s Las Vegas Sands Corp.

Ng was described in court as “a courier” for Sands Macau to the Chinese government. Ng sits on the Chinese People’s Political Consultative Conference, an adviser to the government.

Adelson told the court he was not aware of any association between Las Vegas Sands and Ng.

Ng, who failed to convince the judge that he would return to court if released, has been charged with fraud and imprisoned without bail.

Ng is the head of Macau-based Sun Kian Yip Group, and has made much of what U.S. prosecutors called his $1.8b fortune on his properties such as the Fortuna casino and residential complex Windsor Arch, which overlooks Macau’s race course and the Cotai Strip.