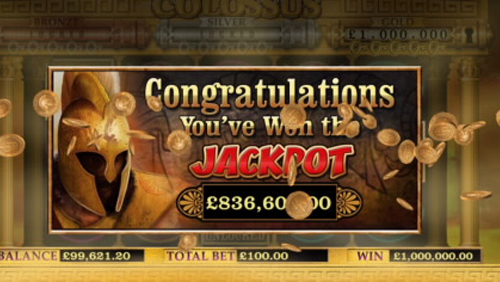 COLOSSUS BETS today announced the launch of ‘Fracpot’, a landmark disruptive slot for the gaming industry, alongside partners CORE Gaming and Sky Vegas. With its £1,000,000 jackpot prize the Colossus Fracpot game is the first slot to incorporate a cash-out feature.

Traditional slots are designed to be an ‘all or nothing’ experience for the player to land the jackpot prize. In contrast, the Colossus game will enable players to cash-out their position between reels being resolved, including the option to cash-out in parts and thus continuing to play for a part of the jackpot prize.

Bernard Marantelli, founder and CEO of Colossus Bets said: “Partial cash-out has become a sports betting juggernaut, with industry leaders such as Bet365 and Paddy Power this year following the lead set by Colossus Bets when launching our sports pools with the feature in 2013. We believe that the application of partial cash-out to other gaming verticals will have a similarly transformational impact. The Colossus slot is the first in what will be a series of gaming products enabling players to bank profits as they progress through a game.”

Justin Chamberlain, CEO of CORE Gaming commented: “Slots have lacked real innovation for some time and become a battle of the brands. This Colossus ‘Fracpot’ slot represents real innovation and as a result the interest from operators has been huge. We are delighted that in Sky Vegas we have a top tier operator who is first to go live with the game and we are looking to develop a suite of partial cash-out games with Colossus Bets.”

Daniele Phillips, Head of Casino Marketing at Sky Betting & Gaming said: “We are really looking forward to launching a slot that could appeal to our large base of sportsbook customers actively using cash-out at Sky Bet. It gives us great cross-sell potential.”

For further information and to arrange interviews, please contact:

Colossus Bets is a multi award-winning pool betting operator, offering the world’s biggest sports jackpot bets including the £10,000,000 Colossus. The company’s B2C offering launched in 2013 and since then Colossus Bets has signed twenty B2B agreements for the distribution of its pools, with live partners including Betfair, Betdaq and BoyleSports.

Colossus Bets has pioneered partial cash-out and has been granted a series of patents in relation to the functionality across all forms of betting and gaming.

CORE Gaming is a world leader in the development of HTML 5 gambling games on all of the most popular mobile devices, operating systems and browsers currently available.

The company has been involved in the development and integration of a huge range of highly popular games for most of the major international operators and is currently developing a portfolio of propriety slot games whilst undertaking development projects in partnership with a number of leading suppliers to the online and mobile gaming market.

Headquartered in Leeds and led by Chief Executive, Richard Flint, Sky Betting & Gaming was formed in 2001 and has since grown to become one of the UK’s leading online bookmakers, with a team of more than 600 employees and a strong track record of innovation.

As one of the first bookmakers to recognise the potential of online and then mobile platforms for betting and gaming, Sky Betting & Gaming today operates five major online products, Sky Bet, Sky Vegas, Sky Casino, Sky Poker, and Sky Bingo. Its success means it has risen to be the fifth biggest player in the UK market, up from ninth five years ago. Over the same five-year period, the business has delivered an annualised growth in operating profit of over 40 per cent and a fourfold increase in revenues.

Sky has entered into a long-term brand license agreement and other commercial arrangements with Sky Betting and Gaming in connection with the sale.