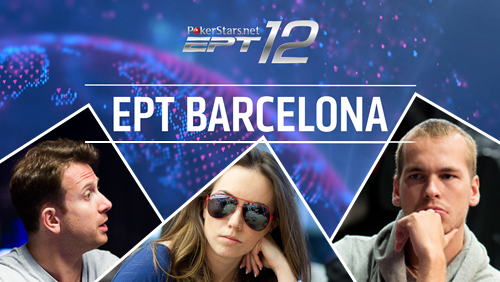 The European Poker Tour Barcelona €25,000 One Day High Roller failed to end in a single day. Martin Finger, Liv Boeree and Mark Teltscher will resume their three-way battle on Thursday.

That word conjured a meaning like never before, as the European Poker Tour (EPT) Barcelona €25,000 One Day High Roller attracted, not only the pick of the world’s top poker players, but two of the world’s greatest footballers.

PokerStars ambassador Neymar Jr and his Barcelona team mate Gerard Pique took their seats alongside 150 other entrants in another huge event, this time creating a €3.7m prize pool. The tournament was such a stunning success that 16-hours later the event had to be curtailed with three very tired players remaining.

All three remaining players are former EPT champions: Finger winning in Prague, Boeree in San Remo and Teltscher in London. They are all guaranteed €391,000, and the top prize is €865,900. Boeree has already locked up her biggest score since her 2010 EPT Main Event win, Teltscher has locked up his biggest win since the 2008 Aussie Millions A$100k Challenge; Finger doesn’t have to go that far back, he won €437k in the €50k SHR at the EPT Grand Final in Monte Carlo last season.

The buzz surrounding Neymar Jr was something else. With Ronaldo Nazario and Rafa Nadal failing to get involved at any decent level within the game, this was an added bonus. The cameras haven’t done this much work since the days of The Beatles.

It wasn’t to be though. Jeff Rossiter eliminated the Barcelona striker: second nut flush v nut flush. To his credit he jumped into a €2k Turbo event, but was also eliminated from that contest.

His teammate Pique also failed to make an impression. He was eliminated by Manuel Blaschke T6<KQ, and registered for the Main Event not long after.

Martin Finger started the final table as the chip leader. Kevin Stani was the first player eliminated when he lost a flip against Rossiter, Iacopo Brandi’s A8 was not good enough to beat the pocket tens of Mike McDonald, and Rossiter’s K8 failed to beat the A4s of Teltscher.

Teltscher picked off another target when his pocket rockets blew the QT of Isaac Haxton out of the water, and McDonald’s teeny-weeny stack was gobbled up by Finger 78o