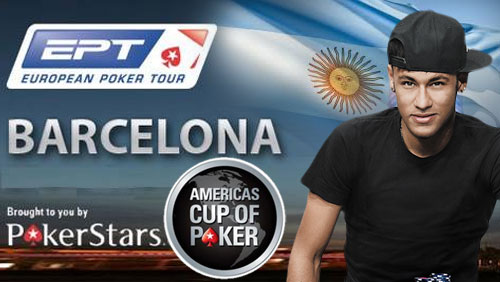 PokerStars are running a series of online qualifiers where the winners will get the chance to meet, watch, and play with Barcelona and Brazilian star Neymar Jr., at the kick off to the 12th Season of the European Poker Tour in Barcelona, and Argentina are crowned champions of the Americas Cup of Poker.

When PokerStars announced the Brazilian and Barcelona star, Neymar Jr., would be joining as their new ambassador, the setting was ripe

for a sweet unveil at the European Poker Tour (EPT) Season 12 kick starter in Barcelona.

Every Wednesday from June 10-July 29 at 14:00 (ET) PokerStars will host special $1,000 Neymar Jr Freerolls. 15-minutes into each match, two tables will be chosen at random, to play in the ‘Neymar Jr Final,’ where a Neymar Jr package can be won.

There is another route that you can take and it’s called Neymar Jr 11 Missions. Players must complete 11 simple tasks in consecutive order to earn a ‘Neymar Jr Final’ ticket. There are no further details on what the tasks entail at the time of writing so keep your eyes peeled for more PokerStars word on that.

· Seven nights accommodation at a four star hotel for two.

· An opportunity to meet Neymar Jr.

You have to be in it to win it, and this is certainly the case with the Neymar Jr competition. One lucky person will be chosen at random to compete against the Brazilian star in a heads-up contest. If you win, you not only get the bragging rights that comes with whipping the ass of the most recognizable face in Brazil, but a $15,000 PokerStars Caribbean Adventure (PCA) package.

“I’m really looking forward to meeting poker-loving football fans in Barcelona,” said Neymar Jr. “While it might not be possible for me to play football against football fans, I’m excited to play poker against one of my fans heads-up.”

PokerStars continued with the football theme by marrying up their Americas Cup of Poker with the 2015 Copa America in Chile.

PokerStars.net hosted their 7th iteration of their Latin American team competition, and Copa America stars of the past turned out in force to join in the fun.

Chile’s Ivan Zamorano, Colombia’s Carlos Valderrama, Argentina’s Sergio Goycoechea, and Mexico’s Luis Hernandez were all on hand to offer advice to the poker players involved in the competition.

The teams were formed of online qualifiers, with the winners of the online contests chosen as team captains. The first round was a series of No-Limit Hold’em 6-Handed contests and Brazil, Uruguay, Argentina, and Venezuela made it through to the semi-finals.

The semi-finals were a series of heads-up matches with Brazil beating Venezuela 3 v 1, and Argentina handing out a whitewash to Uruguay. Argentina went on to beat Brazil 3 v 2 in a close final, with Venezuela beating Uruguay in the fourth place play-off.

Here are the final results.

Each participant was also rewarded with tickets to watch the opening match of the 2015 Copa America between the hosts Chile and Ecuador. Uruguay is the reigning champions after beating Paraguay 3 v 0 in Argentina four years ago.