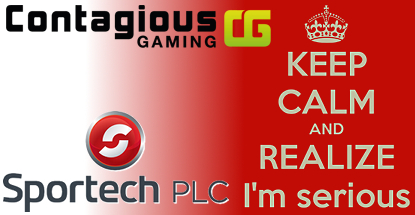 On Friday, the Liverpool-based Sportech revealed that it had received a cash-and-shares offer from the Toronto-based Contagious regarding a potential acquisition. No specifics were offered beyond the total consideration coming at a premium to Sportech’s Thursday closing share price of 62.6p.

Late Monday night, Contagious offered its first public statement on the deal, confirming the accuracy of Sportech’s release. Contagious said that it believes the proposed union could create “a combined, technology-focused sports wagering company and a global leader in regulated pari-mutuel wagering.”

Contagious also offered its rationale for making an offer, including the opportunity to become the “largest pure play sports focused gaming company” on the Toronto Stock Exchange.

Contagious said it had yet to make a firm intention statement as defined by Rule 2.7 of the City Code on Takeovers and Mergers. Under the Code, Contagious has until 5pm on Sept. 11 to make its intentions known one way or the other.

Contagious says its not-yet-official proposal remains subject to a number of conditions, including its ability to secure sufficient financing. Contagious is currently in the due diligence stage of its proposed €5m cash-and-shares acquisition of German sports and race betting software firm Digitote, which supplies its Xturf B2B platform to companies like DIgibet, Winners and Betcenter.