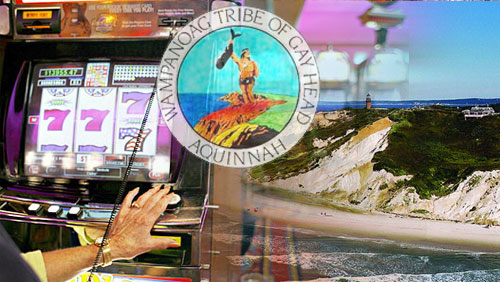 A referendum which would have blocked members of Massachusetts’ Aquinnah Wampanoag tribe to bring limited gambling to Martha’s Vineyard failed to win a two-thirds majority vote on Sunday.

The Aquinnah Wampanoag Indian tribe’s plan to bring 300 electronic, bingo-style games to an unfinished tribal community center in Martha’s Vineyard faces opposition from a group of private landowners, the town of Aquinnah, and the state of Massachusetts.

Tribe members who oppose an on-island casino gathered enough signatures to force a special election asking one question: “Do you vote to repeal Tribal Council enacted resolutions on change of use of the Unfinished Community Center Building on Tribal Lands?”

Aquinnah Wampanoag Chairman Tobias Vanderhoop said the vote was 110-110 with eight votes disqualified, and the tribe’s constitution requires a two-thirds majority vote for referendums to pass.

“The will of our citizens, based on the result of today’s vote, is that there will be no change to present course of the Tribe,” Vanderhoop told The Associated Press.

The special election came after a suit was filed by the state, town and local community blocking the project. The suit argued that a 1983 agreement granting the tribe nearly 500 acres on the famous resort island specifically prohibits gambling. But the tribe maintained that it was within its rights as a federally-recognized tribe to conduct limited gambling on tribal lands. A federal judge heard arguments in the case Wednesday.

Earlier this summer, tensions between the town and tribal officials escalated when the tribe transferred control of the community center to its casino corporation and proceeded with the construction of the gambling property without being given the necessary approval by the town. However, construction work was halted due to a court order.

The potential launch of a gambling hall divided the roughly 1200 tribal members. Most of the opposition came from the 15% of the tribe who reside on the island and voiced concerns that traffic and crime rates might increase.

Supporters of the proposal pointed out that the facility would generate $4.5m annually and the money would be used by tribal officials for important services for the majority of the tribal members – that is, those who reside in the town of Aquinnah.