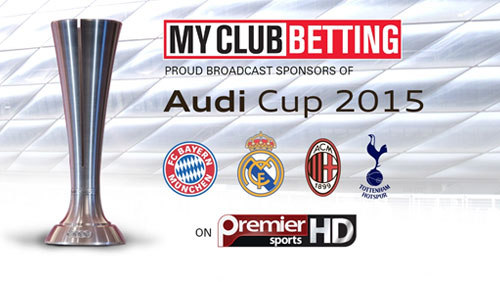 MYCLUBBETTING.COM has teamed up with Premier Sports to become the Official Broadcast Sponsors for the 2015 Audi Cup.

The fourth edition of the Audi Cup, fast becoming one of the traditional curtain-raisers to the football season, kicks off on Tuesday, August 4.

The two-day tournament features four teams and will be played at the Allianz Arena in Munich, Germany. All matches will be broadcast live throughout the UK via Premier Sports and the games will be shown on SKY channel 428, Virgin 551, TalkTalk 526 and in HD via the Premier Player online.

MYCLUBBETTING.COM provide betting sites for any sports club, regardless of size, and are the only bookmaker who give back 20% of revenues to the individual club. Those who take advantage of the zero-cost service also receive free kit and equipment*. Clubs can create their own betting service at the click of a mouse and start earning revenue immediately.

Simon Milham, PR & Communications at My Club Betting, commented: “As well as showcasing some of Europe’s finest talent, there is an interesting dynamic with Real Madrid’s Gareth Bale facing his former club, Tottenham. We are pleased to be the Official Broadcast Sponsors for the 2015 Audi Cup.”

To get a free service for your club, visit MYCLUBBETTING.COM/TEAM.

MyClubBetting.com (MCB) is a specialised marketing communications and technology company, providing a free betting service to any club, from elite to grassroots level.

MCB provide a bespoke club betting website that enables clubs to retrieve a percentage of bookmaking revenues, which can be used to aid grassroots funding.

MCB works with global partners who provide the events, prices, and bookmaking services that provide this unique service.  Supporters will be dealing directly with these partners, opening an account with them and placing bets with them, whilst MCB manages the club relationships.

MyClubBetting.com was the Official Betting Partner at Rugby League World Cup 2013 and Official Broadcast Partner to the Copa América 2015.