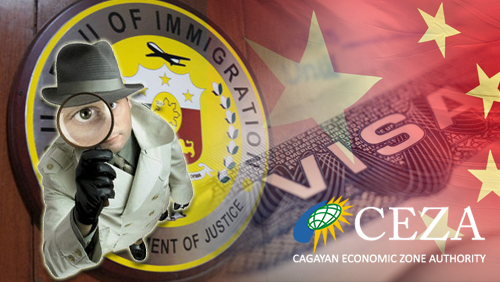 Immigration officials in the Philippines want an investigation into the “unauthorized” release of 22 Chinese nationals, who presented CEZA visas to arresting agents. The Chinese nationals were among the 191 foreigners arrested on July 20 for allegedly not having work permits.

Another exciting week for online gambling in the Philippines. On Tuesday, Bureau of Immigration (BI) officials ordered an investigation into what they said was an unauthorized release of 22 Chinese nationals who were arrested for not having work permits. Here’s the catch: those foreigners already have special work visas.

The 22 were among the 191 foreign nationals arrested on July 21. Through its website, BI said these people were working as call center agents for online gambling operators in an office in Pasay City.

Of these 191 people, only 169 were brought to the BI offices in Manila, where 14 people managed to present valid work visas, leaving behind 155—mostly Chinese nationals—to face deportation charges for violating the Philippine Immigration Act, BI said in a statement.

This means that between the arrest and inquest proceedings, 22 people were released from state custody. According to Rappler, 21 of the released Chinese workers were able to present their Cagayan Economic Zone Authority (CEZA) special visas, while another one is unaccounted for.

The “unauthorized” release was enough to raise the hackles of Immigration Chief Siegfred Mison, who, according to BI spokesperson Elaine Tan, wants “the concerned officers to submit a written explanation on the discrepancies in the number of apprehended subjects.”

CEZA, through BI, issues a temporary working and residency visa to foreign nationals working in the country, particularly in the gaming industry. But Tan said having a CEZA working visa does not mean that its holder is automatically absolved of any liability.

“The company and the place of work must still be established in order to validate that the visa is legitimately used,” Tan told state-owned Philippine News Agency.

The arrests stemmed from a tip of an alleged illegal operation in Pasay. According to the Manila Bulletin, the office was located at the Star Cruises Centre. Travellers International Hotel Group, which owns Star Cruises Centre, said the online gambling and call center company is only a tenant in the building.

Travellers is also the owner and operator of Resorts World Manila as well as the soon to be erected Bayshore City Resorts World in Pagcor’s Entertainment City.

This is the second wave of arrests made by BI this year. In January, immigration agents raided the office of Super 7 Ventures in Makati and arrested 73 foreigners from more than eight countries for lacking valid work visas. According to reports, most of the foreigners were working in the country on tourist visas. The arrested, who were eventually deported, were primarily from China, Taiwan, Malaysia, Indonesia, South Korea and Australia.