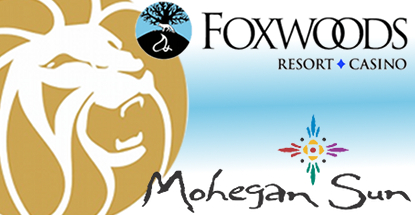 However miniscule, the increases will be welcome news to the two facilities, which have undergone a prolonged stretch of negative numbers due in part to increased casino saturation in the US Northeast region. The threat of even more competition across the border in Massachusetts led Connecticut Gov. Daniel Malloy to approve legislation last month authorizing the tribes to build a jointly run $300m casino along Interstate 91 near the Massachusetts border.

That proposal has irked MGM Resorts, which is building a new $800m casino just across the border in Springfield, MA. MGM CEO Jim Murren had previously scoffed at the notion that a tribal “box of slots” could compete with MGM’s flashy new digs. Murren went as far as to say he’d “love to go toe to toe” with the tribes to see who was best equipped to win the affections of the region’s gamblers.

But fast-forward to Wednesday and MGM is singing a less confident tune. On Wednesday, Bloomberg quoted MGM president William Hornbuckle saying MGM would try to block the tribes’ plan to build that box of slots. Hornbuckle declined to offer specifics, saying only that MGM was “not going to go peacefully.”

In order for the tribes to proceed with their plan, Connecticut would need to amend state law to allow the property to be built off tribal land. Some state legislators have expressed concern that commercial casino operators could sue the state in federal court for not offering them equal protection under the law. In his discussion with Bloomberg, Hornbuckle noted that the tribes were the only operators specified in the state’s new legislation.

MGM recently sought permission from the Massachusetts Gaming Commission for a one-year delay of the opening of its Springfield property due to planned roadwork along I-91. MGM’s revised timetable would see the Springfield casino open in 2018. The Connecticut tribes hope to beat MGM to the punch, although they have yet to select a specific site for their new venue.