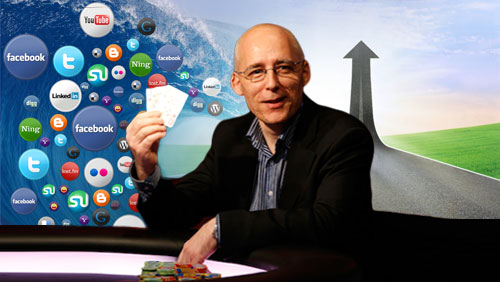 Lee Davy sits down with Talal Shakerchi to talk about poker, life and everything that falls in between.

I sat down with him to talk about his rising popularity within the poker community, his views on social media, what success means to him, whether increased wealth leads to increased happiness, and much more.

You have been one of the most consistent British players at the WSOP this year, have you been aware of that?

“Not really, I don’t think about results too much. Variance is huge in tournaments. I had two cashes in a row which is nice, but you can also go very long stretches without winning anything, so I don’t put too much thought into it.”

“The trouble with tournament poker is everyone feels shit except for one person. Even If I come second I am full of thoughts about what I could have done differently? I guess it’s a stupid pursuit from that point of view. I do enjoy the tournament challenge though, and cashing is definitely better than not cashing.”

How have you adapted to your rise within the game, especially the media coverage that it produces?

“My personal preference is not to be in the limelight. I don’t like a lot of publicity and I am a private person. But when you play a lot of high profile events, whether you are winning or not, then it generates interest.

“It’s not like I am a sponsored pro who needs to be in the media. I don’t have that, so there is no reason to be in the media spotlight. One or two people in the media, like yourself, have become friends, so I don’t say no when asked, but I am fairly indifferent to it, but I guess it’s something I accept is coming when you play the events that I do.”

What’s your point of view on poker players using social media for self-promotion?

“I don’t use Twitter, and I’m not on Facebook. I have never tweeted and I have never read a tweet. I wouldn’t even know how to do it. It’s not something that interests me, and I don’t understand why people are interested? Why would you spend your life reading tweets from someone else, unless it was your family, for example? I don’t understand the whole social media thing. I wonder how much of it is the sites and marketing departments perceiving it as important, rather than the serious players?

“That being said, if I was a sponsored pro, and I had made my a career in poker, then I would see it as part of the job. It also enhances their value if they have a strong social media presence. Daniel Negreanu is an example of someone who seems to be – with my limited exposure to the media – someone who does it well. He is very personable, a good media figure and gets involved in the new trendy stuff…I think Twitch is the new trendy gizmo? That’s part of his role, and what’s made him successful, and other people who are sponsored. It makes sense for them. But it seems like a load of hard work to me.”

What was life like for you before social media exploded onto business?

“The thing with my business was our customers weren’t individuals, so we were never trying to reach out to the guy on the street. Our customers were professionals who were already in our industry and we had a profile within that industry. The institutions that could become our customers knew where to find us.

“In the early days when we started out and no one knew us, there were conferences where everyone would appear in one place, and I would go on the road and visit the key potential customers. That’s very different than the mass marketing that social media exposes you to. The hard part for us was getting someone to sit down and speak to you.”

When I mention the word successful who is the first person that springs to mind and why?

“Success is open to everyone in different context. What is not open to everyone is success in any context they choose. I am not going to be a successful middle distance runner because I don’t go to the gym and haven’t got the body for it. Society seems to see success in a narrow set of areas. Currently that seems to be financial and material success, but that’s a very narrow way of seeing things. People tend to strive too much towards that direction rather than success in broader terms, such as their relationships and what they give back to society, not just what they take out of it.”

“I don’t think money equals happiness at all. I have known wealthy people in my life and I don’t perceive them as happier than less wealthy people I know, and I have seen both sides of the spectrum.

“What does make people happy is the transition from lower wealth to higher wealth. At the time when people are earning more and their wealth is growing they tend to be happier at that point. But when they reach a level of wealth that remains static or pass the level they are ever going to spend in their lives…I am not sure they are any happier at that moment.

“It still matters on how they have built their life. If they have sacrificed other things to gain that financial success then maybe long term they are unhappier than other people. The happiest people I meet are the people who seem to have a strong sense of where they fit in. They have found something to do in life that they enjoy: career or job. It doesn’t have to be a highflying job but they have found something they enjoy doing and have built relationships that they like around that. Also happier people seem to be people who are generous and give more to others. There seems to be a correlation between giving and happiness.”

As you moved from lower wealth to higher wealth did you end up surrounded by people you didn’t like, or ever felt like you didn’t fit in?

“I didn’t grow up with wealth. I went to a state comprehensive school in Birmingham. I went to University, started a career, and it took some time for that income to grow, and then it really happened in the last 20-years with the Hedge Fund.

I believe the poker community contains a lot of fake people, and that makes it difficult to form relationships that have meaning.

“Poker players are like any other group of people. There are people within poker who I regard as very solid people and well intentioned, there are others who are not. That’s probably true in any group, but poker does attract a certain type of person.

“There is a dark side to the industry and a exploitive element where to be successful some poker players – particularly cash game players – feel the need to find weaker players and exploit them. For some of them it’s the dream to find a rich Russian businessman or degenerate gambler they can take advantage of. That can get unsavory. I prefer poker as a competition where it’s an intellectual pursuit where people compete against other similarly skilled people. I don’t like that other side of poker.”

Is there anything in life that has held you back from being even more successful?

“I am comfortable with who and what I am. If that means it limits my success in some direction then so be it. Anyone could do better at everything. With poker I am constantly finding that at the end of a day I am going through one hand where I made a mistake and am kicking myself. Everyone makes mistakes, and hopefully you can learn from them.

“Sometimes in poker I feel I am affected by my demeanor that particular day more than it should do. Some days you may wake up a little tired, or something else may have happened that affects your demeanor. That shouldn’t affect your game, but it does. I wouldn’t say it affects it a great deal, but I would like to be more consistent in that area, but the fact that I don’t play that much hampers that progress.”

What are the things that you believe in that go against the wave of public opinion?

“There are lots of things. For example, I would never have a tattoo. If someone wants one then fine, but I personally can’t see any logic at all in drawing on your body. I would think: “why is someone unhappy with their body to want to paint all over it?” But other people love it. That might be an example of an minority view. There are so many things that I tend to disagree with people on. What I don’t do is modify my opinion just to fit in. Most people are happy with that and are happy that you express your opinion no matter what it is.

“If I see something anomalous from what I understand I like to learn more. When managing money it’s very important where you have a view different to the consensus you don’t just give in and agree with the consensus. Often when you make the most money is when the consensus is wrong and you identify that. You have to be careful. That shouldn’t go towards the point of stubbornness. Sometimes the consensus is right. That’s why you have to ask lots of questions and identify what’s the false assumption, or mistake in reasoning, that leads them to the wrong conclusion? If you can’t find that, then you can’t have enough confidence in taking a view different to the majority.”