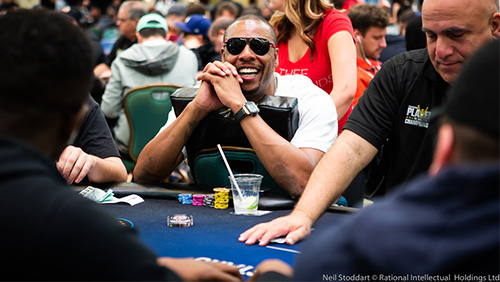 Lee Davy sits down with the NBA legend, Paul Pierce, at the PokerStars Player’s No-Limit Hold’em Championship to talk about his near-death experience, how to deal with the haters and much more.

We’re at dinner, and across the table from me is my nephew Haydn, a complete and utter basketball nut.

“Hayden, do you know who Paul Pierce is?”

Look, I’m from the UK. We have basketball courts, but they’re deserts with nothing rolling across except tumbleweed. When PokerStars told me that I would have the opportunity to interview the 10-time NBA All-Star, I didn’t know what to ask him.

“I’m interviewing him in the Bahamas, what should I ask him?”

Before Hayden can answer, his father jumps in, “Ask him what his favourite club was.”

Pierce played for the Boston Celtics for 15-years scoring over 20,000 points, winning the NBA Championships in 2008. The Truth, as they call him, was such a legend in Boston when he retired in 2017, they retired his jersey.

And yet none of that is as impressive and this.

In 2000, at only 22-years of age, Pierce was in The Buzz Club when someone stabbed him 11-times in the body and face, including a bottle to the head that created a seven-inch wound. Pierce had to undergo emergency surgery on a punctured lung, and if it hadn’t been for his leather jacket, and the quick thinking of his teammate Tony Battie, who rushed him to a hospital, who knows what would have happened.

The following year, he was the only Celtic to start all 82-games.

So I start there.

“When I had an almost near death experience – I was stabbed 11-times – it definitely wakes you up,” says Pierce. “Life is precious. Life is too short for some of us. You learn to appreciate the things around you, the people, a little bit more. It humbles you; matures you. You learn from it. You go through a little adversity, but it can shape you for the rest of your life. I just used it to make me better as a person and know that sometimes you get caught up in the wrong place at the wrong time, which is what happened. Thankfully, I have my life still here, and I have a beautiful family, three children, and I am proud to have them in my life.”

Several years after the Tufts Medical Centre stitched Pierce back together, the six-foot-seven-inch giant thanked them by handing them a $2.5m donation. That’s what I call gratitude, and I wonder if Pierce can remember a time when he has experienced the LEAST amount of gratitude and from whom?

“That happens all the time, man,” says Pierce. “When you’re in a position like I am, obviously I have been put on a pedestal because of my sport, and people look up to me, but then there are people who don’t look up to me and don’t appreciate me. It all comes with it. You go to NBA arenas, and people boo you, you go to some places on the street, and people don’t like you. It’s part of being in the limelight. That’s life. It happens to everyone who is in the limelight, whose famous or been on TV, not everyone is going to like what you do.”

How does Pierce deal with the haters?

Back to the $2.5m gift to Tufts, and that came as a direct result of The Truth Fund, a non-profit created by Pierce to provide educational and life-enriching opportunities for the under-served youth. I ask the former Celtics star why charitable giving is so important for him?

“I just want to help people, man,” says Pierce. “I think if everyone who was in my position had an opportunity to help people the world would be a better place. A lot of times I stop by the side of the road and give a homeless man some money or food. Different charity events I turn up to. We need to help each other around the world. We spend all of this money on warfare, but the money needs to be spent on school, poverty and the poor – a lot of things I don’t agree with goes on in other countries, but that’s a political thing also.”

When you’re the size of Pierce, worth $70 million, and are an NBA legend, it’s not easy getting about without every Tom, Dick, and Lee stopping you to ask for a selfie. I asked Pierce if the poker table provides him with that rare opportunity to be ‘normal?’

“Yeah, man. I enjoy that part of it,” says Pierce. “I enjoy the social aspect of poker. Yesterday, I was sitting at the table asking where everyone is from. I had people from Germany, France, Italy, Spain, London – and I am like wow, just that experience of mixing with different cultures and hearing what goes on in other parts of the world I love that. It’s sort of like sports, playing in the NBA, people from different cultures. I love being a part of that and it’s fun when you can sit at the table, be regular, play cards and shoot the breeze.”

It’s not every day you get to call Paul Pierce a sucker, but I do, asking him how it feels to be the best in the business one minute, and then the next, sitting at a table looking around wondering if you are the sucker?

“I am at the low end of the totem pole,” says Pierce with a laugh, “but with my competitive drive, I want to get better; I want to make a final table; I want to keep going and keep getting better and learning from my mistakes, and eventually it’ll happen.”