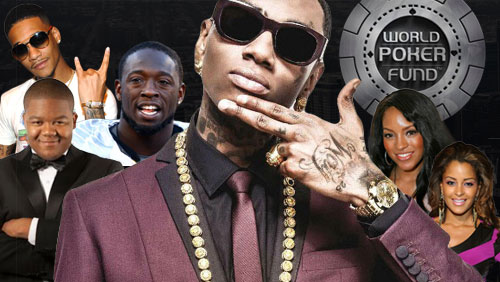 Lee Davy robs a story straight from the pages of Gaming Intelligence as rap artist Soulja Boy and a crew of incredible talent hopes to bring poker back to the people with the launch of the World Poker Fund.

The superstars of music, film and sport are coming to the aid of Californian poker in the shape of American rap sensation Soulja Boy and the World Poker Fund (WPF).

The WPF (I have this image of them calling it the World Poker Tour, someone finding out that the name was already taken, and after 2-seconds of sticking Post-It notes onto a white board came up with this) is an outfit that is mixing poker, celebrity and entertainment to help the plight of poker in California and beyond.

There used to be a time when I knew everyone in the music business. I would sit patiently by the radio, listening to the Top 40 charts, tape deck in hand, fingers poised on Record/Play – but these days I don’t know shit from clay.

The front man of the WPF is a young rap star that goes by the name Soulja Boy. According to Forbes he has earned $7m in record sales and he is diverting some of his attention to the growth of poker in the US.

In recent times we have looked on with dreamy delight as PokerStars have signed the likes of Rafa Nadal, Neymar Jr., and Cristiano Ronaldo. Now the roles have been reversed except the poker stars haven’t been invited.

The WPF lists its team members as De’Anthony Thomas, Drew Sidora, Kyle Massey, Cladia Jordan, Michelle Vu, Lil Za, and a few members of the cast of Winnie the Poo – Poo Bear and Tyga (I’m not messing wit ya – see how I did that).

Soulja told Gaming Intelligence that he plans to ‘bring poker to the people,’ by supporting tournaments around the world, and through poker entertainment shows such as: The Poker Boss, America Loves Poker and Urban Poker.

The WPF is also working with Native American tribes to infiltrate the land-based tournaments, and has established the WPF Indian Gaming Enterprise Committee to help tribes secure the cash backing necessary to petition for federal recognition.

I think the WPF should hitch a ride on the PokerStars California tour bus. The cast of Winnie the Poo could break out the lyrics, Liv Boeree could get on that guitar, and we all know that Daniel Negreanu has more moves than a bowl of jelly.

As Marvin Gaye once croaked: Let’s get it on.