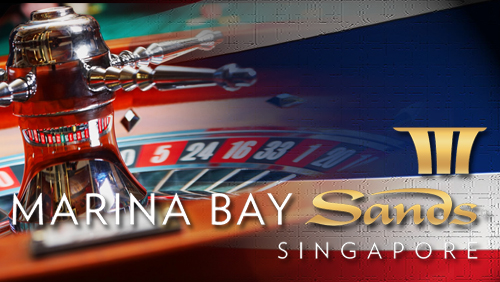 Las Vegas subsidiary Marina Bay Sands has expressed its interest in running a casino and convention complex in Thailand.

Marina Bay Sands Pte Ltd. Vice President for communications Krist Boo said that the company, if given permission, hopes to build a casino in Thailand similar to Singapore.

“We have been searching for new investment not only in Thailand but also all places. Although Thailand has no casino act yet, if this [is] about to happen, it is very interesting,” said Boo.

The comments were made to Thai journalists visiting the company’s Marina Bay Sands integrated resort in Singapore. It has also been reported that Sands executives had previously approached the Thai government about building an integrated resort in Thailand but were turned down.

Currently the only legal gambling allowed in the country are two Royal turf and sports clubs that allow betting on horse races and the official lottery.

A proposal to legalize casinos was floated last month by a dozen members of the National Reform Council (NRC). Major Anan Vacharothai and 11 others came out in support of an idea to legalize casinos in the country, stem the flow of revenue over Thailand’s borders, bolster the economy, and provide jobs. However, the council’s chairman, Thienchay Kiranandana, said that the plan is not under consideration. Soon afterwards, Thailand’s Police Chief Sommai Phasee endorsed the proposal. The police boss said it would stop Thais visiting casinos in neighboring countries and keep tax revenue from gaming in the local economy.

Thailand Police Chief General Somyot Poompanmoung along with Finance Minister Sommai Phasee came out in favor of the idea but the Prime Minister, General Prayut Chan-o-cha shot it down and instructed the top cop to stop promoting the idea.

The PM also noted that casinos could not be set up in Thailand right now and the legalization of casinos will take time as studies and research must be conducted first.

Las Vegas Sands Corp has also expressed interest in opening a casino in Vietnam but conditioned its interest on a change of law there that would allow local residents to gamble. Sands Chairman and CEO Sheldon Adelson also said during Sands’ 2014 Q4 earnings call that the company remains focused on potential development opportunities in Japan, Korea and Vietnam, believing that integrated resort development could bring benefits to these countries in terms of business and leisure tourism, employment and economic growth.