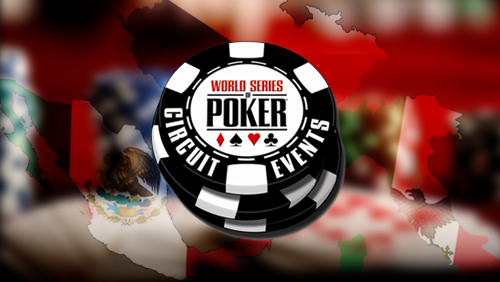 Lee Davy listens to the crickets whilst giving you news of the World Series of Poker Circuit schedule for 2015/16 and the decision to make it a global tour.

I gazed at the shimmering night sky as lightning bolts came out of nowhere and surrounding the sickle shaped moon. I was wondering what part of the earth they scorched. It was magic. It was Las Vegas.

“We know not everyone can make it out to Las Vegas for the World Series of Poker.” Said WSOP Executive Director Ty Stewart.

He wasn’t lamenting the loss of the illuminating lightning strikes. Instead he was promoting the new schedule for the 2015/16 World Series of Poker Circuit (WSOPC) – the only opportunity for some people to experience the brand, win a gold ring, and a seat where a bracelet is burned onto one persons arm.

It wasn’t your usual run of the mill, reach for the razor blades scheduled press release. This one was historic. It created a stir in one’s heart. For the first time in the tour’s 12-year history the WSOPC was going global. The European Poker Tour (EPT) and World Poker Tour (WPT) were going to see another set of prudent eyes.

The 12th season of the WSOPC will include 19 domestic stops and 6 international. Although not declared, I can tell by the tone of the e-mail I received that there will further events added when the time is right.

On the domestic front, Bally’s in Las Vegas is the only new stop. All the ardent favorites remain. International stops will be held in Italy, Mexico and the Czech Republic, with three more events not yet named, possibly due to continued negotiations. I expect the Spielbank Casino in Berlin to host one.

The only other differences to the normal schedule of events are as follows:

1. Two automatic qualifiers from the International events will win seats to the end of season WSOP Global Casino Championships where they will play for the chance to win $1m and a gold bracelet.
2. Any ring winners that don’t qualify for the season ending finale will be given the opportunity to buy-in to the event for $10,000.
3. Main Events will be re-entry and players will be allowed to re-enter once per flight, there will be two flights, and therefore players can enter each event four times.

“The WSOP Circuit continues to be a great success, both getting new players into the game and creating tomorrow’s stars.” Says Palansky.

Now I’m done writing this, I’m going to take a seat on my balcony and watch some more lightning scare the shit out of the cats and dogs.