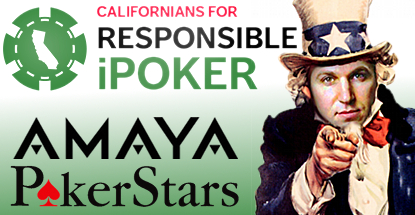 PokerStars, the Morongo and San Manuel Bands of Mission Indians and three state cardrooms – the Bicycle Hotel Casino, Hawaiian Gardens Casino and the Commerce Club – have launched Californians For Responsible iPoker . The group has launched a website (Californians4ipoker.com) to promote its idea that Californians are “best served and protected by the introduction of robust and responsible iPoker legislation.”

The site lists “10 reasons we want iPoker in California,” which surprisingly omits ‘paying off Amaya’s billions in debt’ in favor of clichés like protecting children from the terrors of being dealt a 2-7 off-suit. The site also includes a partnership statement, which includes a plea for allowing Californians “choice and access to trusted online poker brands.” Ahem.

The partners believe it’s time to abandon the “failed, divisive politics of the past that motivated anti-competitive and likely unconstitutional legislative proposals specifically intended to exclude one of the most successful and well-regulated iPoker service provider from California’s market.” Again, ahem. (What, was ‘Californians For PokerStars’ taken?)

The statement indirectly advocates for inclusion of state racetracks in the online poker marketplace, by offering support for legislation that allows the state’s “existing licensed gaming providers – including tribes, card rooms, and others” to offer online poker.

The inclusion of tracks is right up there with ‘bad actors’ (such as Stars) on the list of dealbreakers for an influential coalition of tribes that is the principal obstacle to passage of Stars’ preferred online poker legislation. The coalition’s anti-Stars messaging has become increasingly strident in recent weeks, so Amaya clearly felt it had to do something to offset the negativity.

Stars’ new group says it wants California poker players to “join the movement.” The group is asking poker players to sign up for updates and tips on how they can get involved in the push “to pass online poker legislation this year.” The decision to use the phrase “this year’ instead of “2015” will likely save some time when they update the site for 2016.

The group is also offering to send some of its poker ambassadors – including Daniel Negreanu, Vanessa Selbst and Jason Somerville – to local cardrooms as part of the PokerStars Pro Tour. The tour’s itinerary remains a mystery for the moment, but any cardroom owners looking for a sneaky way to meet Liv Boeree are invited to submit their names for consideration.