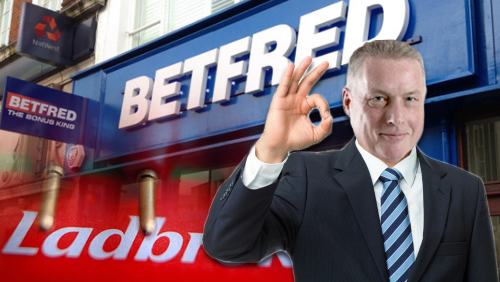 The Irish Times have reported that Betfred is studying a potential bid for the Ladbrokes’ troubled Irish retail betting division, however the newspaper has questioned whether Betfred will place a firm offer.

Same with Paddy Power, who was reportedly preparing for a £1.6b bid for Ladbrokes’ overall operation, Betfred remains discreet with its bid and chose not to give any comment. Unlike Boylesports, who have publicly showed a strong will to invest an eight-figure sum in the division, should they be granted approval for takeover.

Owned by Fred brothers and Peter Done, Betfred is based in Cheshire and was established in 1960.

The bookie owns 1,375 betting shops, has a digital arm and took £8 billion worth of bets from its customers in 2013, resulting in earnings of £69 million.

Betfred has no retail presence in Ireland, which is why acquiring Ladbrokes’ Irish business would be a great opportunity for the company’s expansion.

Ladbrokes Ireland, which is currently under examinership protection from creditors, has appointed auditor Ken Fennell of Deloitte to oversee a restructuring of its retail operations.

Ladbrokes UK and Fennell have put forward a rescue package to the Irish High Court, which involves closing 60 of its 196 betting shops and cutting 250 of its 850 jobs.

Boylesports challenged the examinership process and has accused Lads of ensuring that Ladbrokes Ireland remains under its current ownership. It has also complained that Lads have failed to provide access to information Boylesports requires in order to finalize its takeover bid.

The Irish High Court is set to review Boylesports’s bid on Friday.