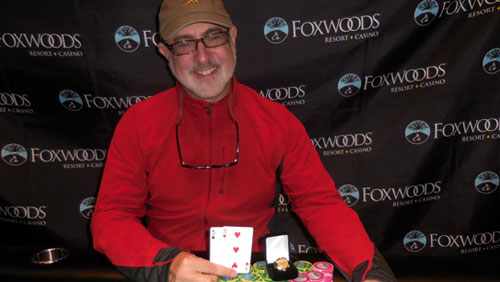 Image David Kulchman calls himself a ‘part-time poker player, and full-time Dad’, but if he keeps knocking these types of results out of the park, that might have to change.

The man, who learned to play Seven Card Stud and Five Card Draw for pennies, has walked away with the top prize of $124,370 in the $1,675 World Series of Poker Circuit (WSOPC) Main Event at Foxwoods Connecticut.

Kulchman defeated 376 entrants on his way to victory, and even had to fire two bullets, after being eliminated early doors on Day 1A. The event created a prize pool of $565,315 and the final table contained a few heavyweights in the shape of Greg Himmelbrand and Will ‘The Thrill’ Failla.

The man from Lexington, Massachusetts, may say he is a ‘part time’ player, but don’t let that fool you. Kulchman has spent a lot of time researching this game, including working with members of the MIT Blackjack team, and members of BARGE (Big August Recreational Gambling Excursion) – experiences that Kulchman credits for his success.

He waltzed into the final table as the overwhelming chip leader. He held over a million chips more than anyone else, and wielded it to great effect knocking out every single player from David Grandieri (7th) to his eventual heads-up opponent Michael Thibeau.

Kulchman’s victory means we will see him participate in the WSOPC National Championships at the end of July. He has now earned close to $400,000 in live tournament earnings. His best score to date was a 63rd place finish in the 2012 WSOP Main Event for $128,384.