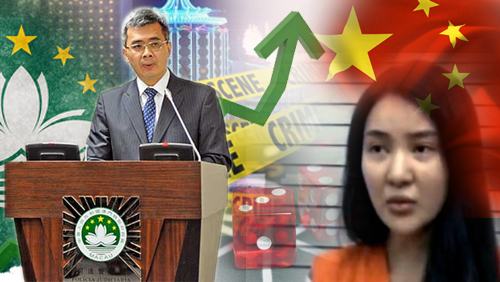 Macau’s Secretary for Security Wong Sio Chak released the latest crime statistics for the region. Police reported investigating 3,588 crimes in the first quarter of 2015, a rise of 2.4% over the same period in 2014.

The number of casino crimes ballooned 22.45% to 310 cases investigated by the enclave’s police force. These are crimes connected to Macau’s casinos such as loan sharking and illegal detention.

Wong Sio Chak said that despite double digit growth, the growth rate is down from the boom years of 2012 and 2013 but the 310 casino related crimes in the first quarter have them on pace for 1240 crimes, up significantly compared to the 667 investigated in 2012.

Illegal detentions have almost doubled in Q1 2015; rising from 34 to 67, while loan, sharking is up 25.9%. A casino industry source told the South China Morning Post that the rise is due to “criminal enterprises” looking to make up for losses due to the corruption crackdown, which has resulted in a crash in the lucrative VIP Junkets market.

In China, the scandalous social media star Guo Meimei has been formally charged with running a casino out of a luxury apartment in Beijing by the People’s Procuratorate of Beijing’s Dongcheng District.

Meimei was arrested last July for promoting international online betting sites via her popular social media accounts. She confessed her crimes in a tearful China Central Television appearance but at the time that wasn’t enough to convince prosecutors that they had enough evidence to convict Meimei.

Things have changed since then, “We have solid evidence to prove Guo and her friend, Zhao Xiaolai, organized others to engage in gambling on many occasions. The circumstances were so serious that the suspects should be held accountable,” said a statement by Dongcheng district people’s procuratorate.

This isn’t Meimei’s first run-in with the law, in 2011, she claimed to be operating an organization under the Red Cross but people became concerned after she flaunted her wealth and extravagant lifestyle on social media. It turns out she was never connected with the Red Cross and her wealth was due to her performing sexual acts for high-end clients earning several hundred thousand Yuan per job.