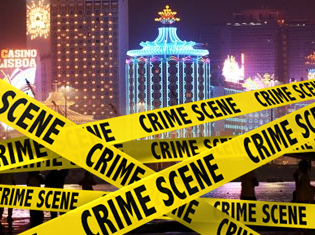 Macau has come a long way since triad members routinely exchanged gunfire in the streets during the turf wars of the 1990s. But while junket operators have gone increasingly ‘mainstream’ since those bad old days, Macau’s critics – most of them American, for what it’s worth – continue to see the world’s top gambling jurisdiction as a modern-day Sodom and/or Gomorrah (despite American casino outfits having less than stellar records themselves). That said, here are a few of the more colorful criminal capers that have kept Macau’s authorities busy over the past few months.

Earlier this month, Macau’s Judiciary Police revealed that police in Hunan province had arrested three mainland residents on suspicion of attempting to blackmail over 100 government officials and lawmakers in Hong Kong and Macau. The blackmailers had demanded that each of their victims deposit between RMB 100k and 500k (US $16.3k to $50k) in a mainland bank account, otherwise the blackmailers would post photos of the officials in sexually compromising positions on the internet. But according to a Xinhua report, the victims were reluctant to ante up once they realized that the photos in question were crude Photoshops using downloaded photos of the officials’ heads pasted onto pornographic images. (Wait, you mean Harry Reid isn’t Wolverine?)

MEAN GIRLS, THE MACAU VERSION
Two mainland women were arrested earlier this month on charges of loan sharking and false imprisonment after a gambler claimed he’d been held against his will. The Macau Post Daily reported that an unidentified male gambler had been approached by three women after blowing all his money at a casino on Cotai. Far from ignoring the man once they realized he was flat broke, the women offered to lend the gambler HKD 400k ($51.5k), for which he’d be charged 10% ‘instant interest’ on each subsequent wager.

After blowing through the borrowed cash in short order, the gambler claimed he was imprisoned in a hotel room by two of the women, whose names were given as Koo and Kuo (sounds pretty cuckoo to us). Sadly, the report failed to indicate what methods the trio employed to prevent the gambler from escaping, so we’ll have to assume these were three-fifths of Pulp Fiction‘s all-powerful Fox Force Five. But the women proved more threatening than cunning. In order to arrange payment of his debt, the gambler was allowed to phone a friend, who in turn called the police, who eventually rescued the man and arrested the two women. The third suspect remains at large, having proved as elusive as this gambler’s manhood.

NO TAXATION WITHOUT DOCUMENTATION
Two Macau companies have been accused of illegally claiming government authority to cash in VIP junket gambling chips in exchange for a ‘tax’ commission. As a rule, junket-issued chips are non-negotiable, in that they can be used to wager at VIP gaming rooms and any winnings generated via their use are cashable, but junket chips can’t be exchanged directly for cash. This presents a dilemma for gamblers who have junket chips remaining at the end of their stay, especially if they don’t plan to return to Macau for some time and would rather not have a significant sum tied up in non-negotiable form.

VIP gamblers can usually find someone willing to exchange junket chips for cash in return for a commission, but the two companies in question – identified by the Public Prosecutions Office as Golden Island International Group and Flamingo International Group – have been telling gamblers that they are authorized by Macau authorities to perform just such a service. Macau Business Daily reported that representatives of the two companies have even produced bogus documents purporting to show their official recognition as authorized chip cashers. The companies have reportedly been running their scam since July 2012, but the authorities have yet to make any arrests.