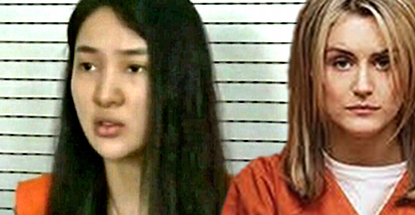 Infamous Chinese social media starlet Guo Meimei (pictured on the left) has publicly confessed her guilt following her arrest last month for illegal sports betting. In the midst of the 2014 FIFA World Cup, Guo was arrested in Beijing after blithely informing her large online audience of her happy experiences betting online via international gambling sites. A Xinhua report claimed that Guo had been paid RMB 400k (US $65k) to promote the betting site in question. The authorities duly pounced on China’s sluttier version of Kim Kardashian, leading to this week’s appearance on China Central Television (CCTV).

Guo’s tearful CCTV confession detailed how she got involved in the illegal gambling world in 2012 after meeting a professional gambler at a Macau casino. The pair opened an underground casino in an apartment in Beijing’s Chaoyang District in February 2013, but the minimal returns the enterprise netted convinced Guo to utilize her internet fame as a promotional tool. Guo claims to have earned commission of between 3% and 5% on losses incurred by gamblers she lured to the illegal gambling den.

One of these gamblers described how Guo’s naughty schoolgirl act disappeared the minute she realized he couldn’t pay his RMB 400k (US $65k) marker. The gambler – who referred to Guo as “evil” – claimed he was prevented from leaving the casino until he agreed to be accompanied back to his company so that he could obtain the necessary funds.

Guo also confessed to literally capitalizing on her fame-whore reputation by prostituting herself with wealthy followers. Police said Guo earned “hundreds of thousands of yuan” for each encounter, to which Guo added that “being famous is always good” in that wealthy businessmen “don’t care how much money they have to pay as long as they can sleep with me.”

In her CCTV appearance, Guo publicly apologized to the Red Cross Society of China (RCSC). Guo’s climb to the top of the social media fame ladder was ably assisted by the controversy surrounding her posts, in which she implied her apparently luxurious lifestyle was funded by money siphoned off the RCSC. The ensuing ‘scandal’ caused a precipitous drop in donations to the RCSC. In her interview, Guo admitted having nothing to do with the RCSC and that she’d “made a huge mistake to gratify my vanity.”

Despite Guo thus abasing herself, China’s netizens are raising questions as to why China’s state broadcaster and official media agency is devoting so much coverage to the trollop. The US-based China Digital Times published what it claimed was a state edict to Chinese media to “prominently display” Guo’s confession. Conspiracy theories behind the Guo push include a desire to help rehabilitate the RCSC’s image and/or to deflect attention from the regime’s delayed reactions to the recent earthquake in southwest China that killed 400 people or a factory explosion that claimed 75 lives. Our own personal theory is that it’s all part of a viral marketing campaign for the Chinese-language version of Orange Is The New Black.