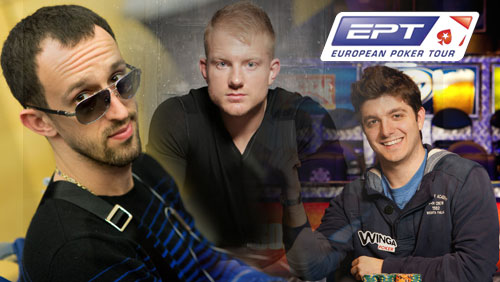 Lee Davy closes down his coverage of the European Poker Tour Grand Final in Monte Carlo with news of side events victories for Rocco Palumbo, Jason Koon and Igor Yaroshevsky.

The European Poker Tour (EPT) Season 11 Grand Final in Monte Carlo has come to a close. Someone, somewhere has spit and polished a record 78 trophies, and millions of euros have passed from player to player.

Barcelona will be the next stop. A certain Mr. Neymar Jr. will be joining the fun. But we still need to draw a line under the festivities in the land of the rich and famous. Three more side events to bring you up to speed on and we will begin with Rocco Palumbo.

World Poker Tour (WPT) Champions Club Member, and World Series of Poker (WSOP) bracelet holder, Palumbo, has had a decent Grand Final. Only in poker could you take €100,000+ away from the tables, and could still be operating at a loss. So the term ‘decent’ will have to do for now.

Palumbo was a member of the triumphant Italian team that won the inaugural Global Poker Masters (GPM) at EPT11 Malta. He cashed three times in EPT11 Monte Carlo. He finished 23rd in Event #54 €1,100 No-Limit Hold’em (NLHE) for €2,110. Then came the good stuff.

Jason Koon continued his recent good form with victory in Event 74: €5,200 Turbo, 8-Game, 6-Handed. It was his only cash of the trip. Fortunately, he was coming off the back of a March that saw him take away close to $700,000 from the high roller tables at the Aria.

Koon defeated a teeny-weeny field of 9 entrants to take the first prize of €21,830. The only other two players to cash in the event were the WSOP Player of the Year George Danzer (2nd), and Scott Clements (3rd).

Finally, the largest side event, in terms of prize money (outside of the high rollers), went the way of Igor Yaroshevsky. Event #76: €10,200 Turbo NLHE, 6-Handed attracted 81 entrants, and the Ukrainian defeated Connor Drinan, in heads-up action, to take the €218,300 first prize.

EPT12 Barcelona will begin in August.

Will the organizers continue to break the record for the number of tournaments? Only time will tell, but for now that honor goes to a very successful Grand Final in Monte Carlo.