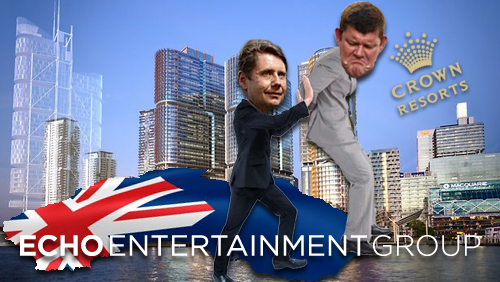 An assessment done by Wentworth Selborne Chambers on behalf of Echo said that modifications to Crown’s proposal “would be open to judicial review proceedings in Class 4 of the Land and Environments Court’s jurisdiction.”

Crown’s new concept plan will see a 7.4% increase in gross floor area for Barangaroo, including increasing the height of the hotel and casino building from 168 meters to 275 meters.

Echo’s legal submission questioned the “creep factor” between Crown’s original plan and the huge number of modifications, which may have led government planning authorities to fail to assess the overall environmental impact of the new proposal.

“[The modification] if granted, would be open to judicial review proceedings … of the Land and Environment Court’s jurisdiction,” the advice says.

The advice also indicated that New South Wales (NSW) liquor and gambling authorities, the health department and the department of community services should have been consulted as they are “arguably relevant in relation to a proposal for a casino”.

“The enclosed advice and assessment raise matters which therefore should be fully considered and addressed, as would be the case in regard to any planning application,” Bekier added.

Healthcare provider Primary Healthcare has also raised concerns in a submission about rezoning plans for the area, which could see commercial properties owned by Primary rezoned as a public recreation.

“I consider this to be a blatant misuse of the planning process by The Star Casino to try and protect their existing monopoly and delay much needed competition into Sydney’s VIP gaming market,” Craigie said.

Meanwhile, the Sydney Business Chamber supported Packer’s resort and casino development, saying that the modifications are for the improvement of the appearance and public amenity of the site.

A spokeswoman for developer Lend Lease said the company will review the submissions and “respond in detail to the points raised to the NSW Department of Planning and Environment.”

The NSW Department of Planning and Environment has received 30 submissions from the public regarding the $9 billion Barangaroo development on Sydney harbor.