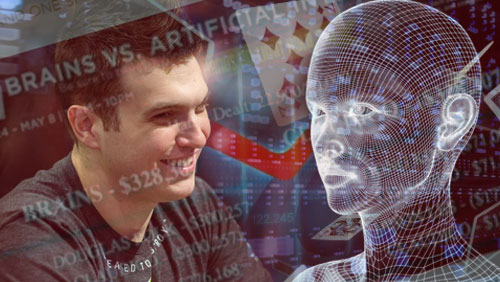 A quartet of professional poker players has beaten a form of artificial intelligence in a series of Heads-Up No Limit Hold’em contests. Scientists claim the narrow margin of defeat was a statistical tie.

Artificial intelligence (AI) will not take over online poker rooms quite yet. The quartet of Doug Polk, Bjorn Li, Dong Kim and Jason Les have beaten Claudico – the AI program created by a Carnegie Mellon University team – by $723,713, over a period of 80,000 hands.

Les called the event ‘historic’, and said he was happy to be involved and ‘be part of the winning team’. The scientists have a slight problem with the use of the word ‘winning’. With $170 million available on the table, during the two-week event, the white suits are calling this one a ‘statistical tie.”

“We knew Claudico was the strongest computer poker program in the world, but we had no idea before this competition how it would fare against four Top 10 poker players,” said Claudico development director Tuomas Sandholm, a professor of computer science at CMU. “It would have been no shame for Claudico to lose to a set of such talented pros, so even pulling off a statistical tie with them is a tremendous achievement.”

Polk was full of praise for Claudico, but also surprised by a number of erratic plays the AI made during his match.

“There are spots where it plays well and others where I just don’t understand it. Betting $19,000 to win a $700 pot just isn’t something that a person would do,” Said Polk.

Polk wasn’t the only person left scratching his head by some of Claudico’s moves.

“The computer definitely bluffs and does all sorts of other tricks that human poker players know, but the key is that we don’t program in the bluffing,” Sandholm said. “So the algorithms themselves figure out the strategy, how to bluff, when to bluff, in what situations and so forth.”

The theory behind the project is to use AI to help improve the human race. Microsoft helped support the program, but their founder Bill Gates, is a little concerned about the rate of progress AI is making. Speaking on Reddit recently the world’s richest man said:

“I am in the camp that is concerned about super intelligence. First the machines will do a lot of jobs for us and not be super-intelligent. That should be positive if we manage it well. A few decades after that though the intelligence will be strong enough to be a concern.”

Gates concern comes after Stephen Hawking said that the speed of human biological evolution means that AI will one day ‘take off on its own’, that humans ‘wouldn’t be able to compete,’ and that one day humans would be ‘superseded’ by AI. Space X, CEO, Elon Musk, concurs. The founder of PayPal and Tesla Cars called AI the ‘biggest existential threat’ to the human race.

Claudico design team member, Sam Ganzfried, believes it won’t be long before Claudico will be beating professional poker players on a regular basis. “I think we can have a new program that can beat humans in a year.”

But for the moment, that crown sits firmly on the head of the human poker player.

Earle Hall tells everyone to get educated about AI at G2E Asia
Derek Tonin
13 December 2019
.