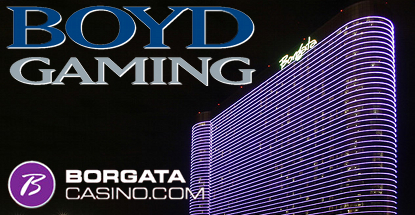 Boyd, which shares ownership of Atlantic City’s market-leading Borgata Hotel Casino with MGM Resorts, said its online gambling operation generated earnings of $1.1m in the three months ending March 31. It’s not a huge sum, but it compares quite favorably to the $3.2m loss the online business recorded in Q1 2014. Earlier this year, Boyd projected that the online operation – a partnership with UK-listed online gambling operator Bwin.party and California’s Pala Interactive – would generate full-year earnings of between $3m and $5m.

The Borgata was also a solid performer on the brick-and-mortar front, with revenue rising 9.2% to $182.6m and earnings nearly doubling to $37.8m. Boyd CEO Keith Smith told analysts the “right-sizing” Atlantic City endured over the past year “has helped stabilize the operating environment.” Having lost four of its 12 casinos, Smith believes the new AC “appears to have reached a level of supply that is appropriate for demand and the remaining properties are generally seeing better results.”

On a regional basis, Boyd’s Las Vegas Locals market was basically flat at $150.3m, as non-gaming revenue rose for the seventh consecutive quarter, helping to offset lower sports book hold. The Downtown Las Vegas business saw revenue rise 1.6% to $56.6m. Revenue from the Midwest and South segment was up 2.9% to $217.8m and the Peninsula segment was up 3% to $125.9m.