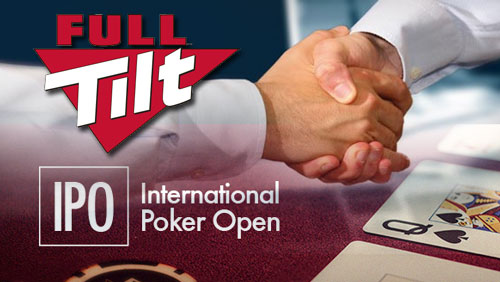 Full Tilt has replaced Boylepoker as the headline sponsor for the low stakes buy-in event, The International Poker Open, with events promised throughout Ireland and England.

Full Tilt has thrown out a timely reminder that they still have some love for their poker arm, after signing a deal to replace Boylepoker as the headline sponsor for the International Poker Open (IPO).

Fans of Full Tilt were beginning to wonder. The word ‘poker’ was dropped from the title, and virtual poker tables put in storage to make way for the new look online casino. But the announcement of the partnership with the IPO, and the introduction of an online satellite qualification program, shows that the low buy-in recreational player is still highly thought of.

PokerStars has the United Kingdom & Ireland Poker Tour (UKIPT), and Full Tilt now has the Full Tilt IPO. The arrangement runs from May 2015 through to April 2016 with seven events already announced. Scottish and Welsh players will be disappointed, although there are more events going to be released in 2016.

The most lucrative event will be the Main Event in Dublin. Last year, Chris Pyke ate all the little fishes when he topped 1,656 entrants to turn a €230 investment into €71,650. You can see why it’s always been one of the most popular tours on the European circuit.

Full Tilt’s Managing Director, Dominic Mansour, said he was delighted to ‘put the Full Tilt stamp on an already-successful tournament series,” and the IPO’s Tournament Director, Stephen McLean, was equally as chipper saying, “With Full Tilt behind us, we’re confident that this year’s tour will be bigger and better than ever.”

Full Tilt is currently midway through their MiniFTOPS series, but qualification for the IPO events has already begun, where you can qualify for as low as 25 cents. The first event will take place at the Star Casino Bray, just outside Dublin, and will be a $250 buy-in event. Players start with 25,000 chips, with blind levels increasing every 30-minutes, extending to 40-minutes on Day 2.