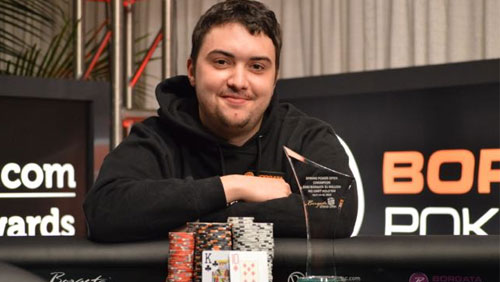 Asher Conniff wins the opening event of the Borgata Spring Poker Open, after beating his friend Matt Stout in heads-up action, in the $1m guaranteed event.

The 2015 Borgata Spring Poker Open, in Atlantic City, has kicked off in fine fettle, after Asher Conniff defeated 2,408 entrants to take the first prize of $203,231.

Conniff cut a deal with Matt Stout, and the reigning champion Carlos Alvarado, before going on to capture the first prize, the trophy, and all the plaudits. We don’t have the full details of the deal, but know that Stout picked up $140,000, and there was $20,000 left to play for.

The event was a $560 buy-in event. It carried a $1m guarantee. There wasn’t even a sweat. Whilst Conniff won the title, the star of the show has to be Alvarado. Back in 2014 he topped a field of 2,483 entrants to capture the $209,547 first prize. To waltz through another meaty field to finish third is nothing short of spectacular.

It was the eventual champion Conniff who ended Alvarado’s hopes of a repeat performance. The former champion moving all-in, on a flop of [7d] [3d] [3c], Asher called with pocket nines, Alvarado showed [6d] [4d] for the straight and flush draw, and the turn and river bricked.

That exit saw Conniff take a huge chip lead into the final heads-up phase: 49m to 11m. Interestingly, both players qualified for this event online with Stout having parlayed a $60 investment into $140k. The final hand of the heads-up action saw Stout shoving the button, holding [Qh] [Jh], and Asher calling with [Kc] [Td]. The board ran out [Ac] [9s] [4s] [Ad] [8s], and the title went the way of Asher.

Conniff’s victory was the largest of his career. In fact, his $203,231 first prize was more than the entirety of his bankroll since he started racking up live tournament scores back in 2009. For Stout, it was another close run thing. Despite earning over $3m in live tournament earnings, including six figure annual hauls every year since he started recording stats in 2006, he still hasn’t crossed the finish line first in a major event. One feels it’s only a matter of time though.