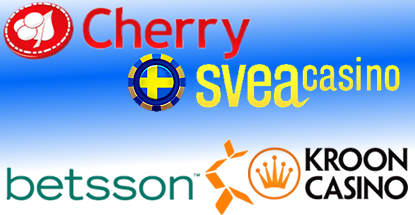 Wednesday brought word of the launch of SveaCasino.com, a Nordic-focused online casino. The launch is the first fruit of Cherry’s hookup with affiliate marketing business Game Lounge, in which Cherry acquired a 51% stake this January. SveaCasino features gaming content from Cherry’s software offshoot Yggdrasil Gaming, as well as third-party content from Net Entertainment, Microgaming and Amaya Gaming.

Cherry CEO Fredrik Burvall, who assumed the chief exec’s role in December, expressed pride at launching the first white-label brand just two months after Cherry acquired Game Lounge. Cherry has promised to roll out additional brands in the near future in yet to be determined markets. Game Lounge CEO Jonas Cederholm said his firm was the “perfect match for launching new casinos like this,” thanks to its affiliate network of over 250 websites.

Meanwhile, Betsson is planning to add a sportsbook option to its Dutch-facing Kroon Casino brand. Betsson acquired Kroon and the similarly Dutch-facing Oranje Casino in February 2014 and the addition has already had a significant impact on Betsson’s earnings.

Betsson CEO Ulrik Bengtsson told eGamingReview that the company hopes to have its new Kroon sportsbook up and running in time for the August start of the 2015 football season. Betsson’s own site already caters to Dutch punters but Bengtsson believes Kroon loyalists want “everything under one roof.” The product will be based on Betsson’s in-house sportsbook although “slightly adjusted” for the Dutch market.

However, since Dutch gaming regulators don’t expect to be handing out their new regulated market licenses until 2016 at the earliest, Bengtsson said the new Kroon sportsbook will toe the line when it comes to marketing itself to Dutch punters. Dutch regulators have warned operators that their marketing history will be taken into account when it comes time to vet new license applications but Bengtsson said Betsson had always been careful about remaining “compliant.”