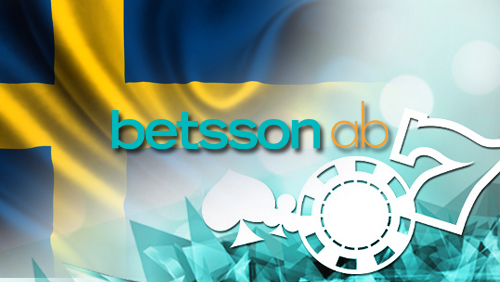 With all the confusion in the Eurozone (Greece gets an extension, Greece doesn’t get an extension), Chinese crackdowns on Macau, war in Russia, and the extremely volatile monetary environment in the US, it’s time to take a look at a (relatively) quiet, nice, sane, stable region where there does not seem to be any potentially explosive development on the horizon: Sweden, with a closer look at Betsson AB. What a relief.

First a look at the monetary environment in Sweden. We’ll need several charts for this.

First, and perhaps most impressive, is that Sweden is one of only a tiny handful of countries whose debt to GDP has not gone up since 2008.

That alone tells you something about the stability of the place. Its economy is on an even growth trajectory, notwithstanding that GDP is not one of my favorite economic indicators.

As for government spending, it doesn’t seem to be out of control at all. From 2001 until today, Sweden has had budget surpluses almost half the time, and deficits that do not exceed 1.5% of GDP.

The only potentially unstable thing about Sweden that could let loose any time is its currency the Krona (SEK) in relation to the Euro, which has weakened more than 10% in two years, despite the Euro tanking of late.

This is because its central bank, the Riksbank, the world’s oldest central bank founded in 1668, is maintaining a currency peg to the Euro by printing a bunch of Krona to buy Euros. This is the same thing that the Swiss National Bank tried to do with the Swiss Franc, but gave up on it, causing the Swiss Franc to shoot through the roof 30% in a day. The same thing can happen to the Krona any day if the Riksbank gives up on its peg.

With that we come to Betsson. Dealing with the currency issue first, if (when) the Riksbank gives up the Euro peg and the Krona shoots up 30% in a day like the Swiss Franc did, even then Betsson should be fine. Why? Because 71% of its revenues come from Nordic countries, and only 27% from the Eurozone. If the Krona goes ballistic, then its Nordic revenues will skyrocket with the extra purchasing power of the Krona attracting more domestic customers, and its Euro revenues will plummet. On net it’s impossible to tell where exactly the chips will fall, but because Betsson is heavily weighted domestically, it shouldn’t be too much of a problem on balance.

The company is in full growth mode now, along with its stock price. Its acquisition of Oranje and Kroon online casinos have turned out well, with both its acquisitions and the Betsson brand growing by 29% and 28% respectively for the quarter. They were acquired relatively cheap as well, with Betsson having no debt before the acquisitions, and now they only carry a 4.3% debt to equity ratio, almost nothing, with no threat from interest rates.

Taxes, surprisingly, are extremely light. Whether they accomplish this through sophisticated bookkeeping or a naturally low tax environment I don’t know. I suspect the former. But either way, Betsson only pays a rate of about 5.5% on earnings. I wouldn’t say that’s “reasonable” exactly because there is also a tax on companies through shareholders with capital gains, but 5.5% direct corporate tax is still pretty low.

There doesn’t seem to be any looming threat to the Swedish economy on the horizon aside from some choppy waters if the Eurozone falls apart. If it does, Betsson shareholders will go through some temporary pain because all capital markets are connected and margin calls can spread anywhere, but it should present a good buying opportunity and recover quickly.

The only substantial threat to Betsson’s business is, once again, government. While it is a fiscally responsible, efficient gaming company that seems to know what it’s doing and has a plan going forward, so was 888 before it got smashed by the Unlawful Internet Gaming Enforcement Act. The two questions are, how long does Betsson have until the Swedish Parliament attacks, and if it does, how bad will it be?

The answer to the first question, the company believes, is about 3 years:

The outcome of the 2014 general election in Sweden has changed the parliamentary situation. Now there is not only a consensus among representatives of various parliamentary parties to re-regulate the Swedish gambling market, but also a willingness from the Government to do so. However, due to the low priority of the gaming issue and the relative uncertainty of the parliamentary situation, many observers judge that any new regulation would, at earliest, be in place in 2018.

The answer to the second question is more complicated. The UIGEA was devastating for 888, but it was a law directed against foreign companies who don’t pay US taxes “invading” the US and preying on the poor gambling-addict peasants who needed to be saved by their generous and divine Ruling Class. In that sense it was harsh and a bit vindictive as regulatory laws go.

A domestic Swedish campaign to regulate the gaming industry would try not to disturb the industry too much and hurt its tax revenue. If Betsson has enough political influence and hires enough lobbyists to build whatever regulation materializes among the politicos around itself, it can even help Betsson brush off the competition.

That wouldn’t be “fair,” but politics never is.

The pattern from here on out for Betsson should be a continued uptrend with short plunges in response to negative Eurozone developments, but otherwise looks safe until 2018.