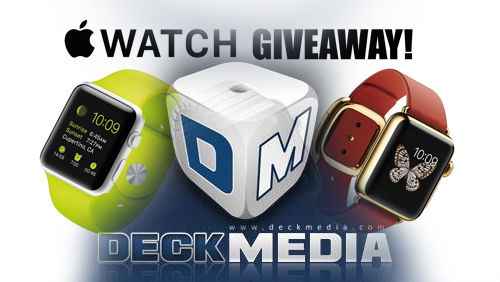 26 March 2015, London, UK (Press Release) — April is a huge month for fitness fans, with marathons running in London, Paris and Madrid, and affiliates promoting DeckMedia’s eight online casinos have every reason to stay active throughout the month.

The affiliate program is offering them a chance to win the highly sought-after Apple Watch Sport, the tech company’s prestigious new timepiece, for any affiliate who shares a photo of themselves in their running gear.

Those who share a photograph of themselves being active will earn five tickets for a prize draw taking place on May 6th. The winner will be announced the following day in the DeckMedia newsletter.

Affiliates can also enter the competition in a more conventional way, by emailing their affiliate manager by April 2nd to confirm their participation and sending more players to DeckMedia casinos in April than they did in March – each additional new depositing player will earn affiliates one ticket for the draw.

“With the days getting longer there is every reason to get outdoors and stay active, and now there’s an extra incentive to make it an active April,” said DeckMedia Affiliate Director Paul.

“We’ve been excited about the Apple Watch Sport ever since its release was announced, and we’re sure the winner of our prize draw won’t be left disappointed.”

DeckMedia’s casinos offer the best in mobile and online slots and table games from a range of software providers, including Real-Time Gaming, WGS Technology, Rival and TopGame. All eight of the casinos, including the four with state-of-the-art mobile content, offer players generous welcome bonuses and a wide variety of real-money casino games which is growing by the day.