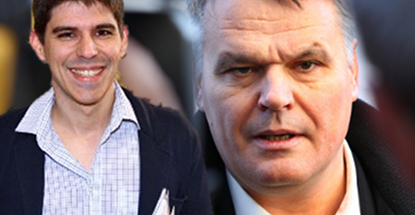 A German biologist has learned the hard way that publicly declared wagers are legally enforceable.

Measles is increasingly in the news these days thanks to a recent resurgence in outbreaks that observers have blamed on the discredited anti-vaccination movement in many western countries. But while anti-vaxxers believe vaccines can be worse than the diseases those vaccines are meant to prevent, they don’t necessarily dispute that the highly contagious measles disease is caused by a virus.

Biologist and vaccination skeptic Stefan Lanka (pictured right) begs to differ, espousing the theory that measles is a psychosomatic condition brought on by “traumatic separations.” Lanka was so enamored with his theory that he made a public offering via his website to pay €100k to anyone who could prove the disease was caused by a virus. Lanka said his intent was “to get people to enlighten themselves.”

Enter German doctor David Barden (pictured left), who saw not only lunacy but also profit in Lanka’s challenge. Barden gathered a suitably weighty collection of scientific evidence of measles’ viral origin and presented them to Lanka with a request for payment of the €100k. Lanka rejected Barden’s evidence so the undeterred Barden took Lanka to court.

On Thursday, a Ravensburg court ordered Lanka to pay up because all the criteria of his wager had been fulfilled. Court spokesman Matthias Geiser said the judges had deliberated for three hours and concluded there was “no doubt about the existence of the measles virus.”

Lanka told German news site The Local that he will appeal the ruling “because we know that the ‘measles virus’ doesn’t exist, and according to biology and medical science can’t exist.” In 1995, Lanka penned an article questioning whether the virus that causes Aids was “Reality or Artefact?

Now if only someone could isolate the source of stupid…