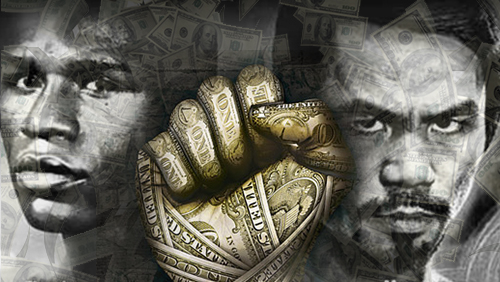 Throughout the whole process behind the latest negotiations of the Floyd Mayweather – Manny Pacquiao fight, the self-proclaimed “A-side” – that would be Floyd – always went back to one word to defend against complaints that the fight had lost its appeal: timing.

We can all argue when the fight should have been made until the cows come home, but in reality, the fact that we’re finally going to see it on May 2 after years of waiting boils down to when Floyd Mayweather decided that it was time to finally face Pacquiao. No one could’ve made this fight other than Mayweather. Not Bob Arum. Not HBO. Not Showtime. And obviously, not Pacquiao.

He held all the proverbial chips and for the longest time, he held on to his hand until the timing was right. This was never about Floyd being scared to fight Pacquiao. This was about Floyd understanding that he could keep the Pacquiao fight in his pockets because he could still rake seven-figure pay-per-view buys fighting anybody not named Pacquiao. He scored an incredible 2.2 million pay-per-view buys against Canelo Alvarez. He even got 1.5 million PPV buys against Miguel Cotto and 1.35 million against Shane Mosley. In hindsight, it now seems incredible that Mayweather was able to draw 1.25 million PPV buys against Victor Ortiz.

But that’s why he’s called Money Mayweather. He picks his opponents carefully knowing that it he can package the fight in a way to make them more interesting than they actually were. That and he knew that he still had the Pacquaio fight in his back pocket, ready to cash it in when public perception began to sour on his fights.

That turning point, at least in my head, happened during the two Marcos Maidana fights. At that point, Mayweather was already running out of viable opponents that he could sell to the public. Pure boxing fans may have been intrigued about the first fight, especially after Maidana scored a stunning win against Adrien Broner, or as he’s otherwise known, the faux Mayweather. But the rematch was anything but sellable, even after Floyd tried to sell it as a continuation of the surprising slugfest that was the first fight. Still, it only ended up selling 925,000 PPV buys, the first time a Mayweather fight didn’t reach 1 million buys since…I don’t really remember anymore.

Once it became clear to Floyd that his PPV numbers would only go south if he kept that Pacquiao card in his pocket and continued to insist on parading anybody that wasn’t the Filipino slugger to the boxing audience. Of all people, he knew this and he understand that the time was right to finally cash in on that card.

So after five years of on-again, off-again negotiations. After months of continued teasing, prodding, and more teasing, Mayweather-Pacquiao is finally on and just as Floyd expected, the timing was absolutely perfect.

Hours after he announced that the fight was a go, tickets to the event on May 2 at the MGM Grand in Las Vegas sold out in 15 minutes. Hotel rooms in Vegas are getting booked left and right. By all indications, the fight is being touted to sell more than 3 million PPV buys, breaking the existing record set by the De la Hoya – Mayweather fight in 2007.

From a betting perspective, sportsbooks are already frothing at the handle for this fight, knowing full well that betting on this fight will be through the roof. Right now, Floyd’s a 2/5 favorite with Pacquiao getting 11/4 odds as the prohibitive underdog.

Floyd’s also getting a guaranteed $120 million, not counting earnings generated through PPV buys, ticket sales, and other streams. Once the dust is settled, Mayweather could stand to earn at least $250 million.

I doubt that the public outcry for a Pacquiao fight affected Mayweather. He was doing fine the past few years against less significant opponents. It wasn’t until his business was getting affected that he finally decided to make the Pacquiao fight. Think of him however you way you want, but you can’t deny that the man played his cards perfectly.

We’re all going to end up lining his pockets with a whole lot of money again and in doing so, we’ll all be validating his genius.