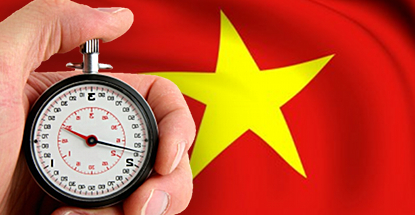 Vietnam says it’s getting serious about picking an investor to build an integrated resort and casino in the Van Don special economic zone in Quang Ninh province. If that sounds familiar, it’s because this process has been going on for a year and a half with very little public sign of progress.

But fear not: Nugyen Van Doc, chairman of the Provincial People’s Committee, told Vietnam Investment Review that local authorities have been asked to speed up site clearances for the resort as well as for the Van Don airport. Time is of the essence, as the investment certificates have to be obtained by March and the recipients have to start construction by April.

The Committee claims companies including Las Vegas Sands have paid visits to the province. Sands routinely cites Vietnam as a promising market but has also stated it’s only interested in building in major metropolitan centers like Hanoi or Ho Chi Minh City. And only if Vietnam relaxes its ban on locals entering casinos.

Other reported tirekickers include Casinos Austria and Phoenix Macau Tailoi, whose only English-language online references specifically relate to this project. Dao Hong Tuyen‘s Tuan Chau Group has promised to spend over $7b building not one but two casinos and Sun Group, whose properties include the Ba Na Hills and Son Tra Intercontinental resorts in Da Nang, is also in the hunt.

VIETNAMESE GAMBLER RESCUED FROM CAMBODIA BORDER CASINO
Whoever builds in Van Don may eventually get the chance to participate in the Vietnamese government’s promised pilot program to allow locals in casinos. Vietnamese gamblers are currently forced to venture abroad to get their gamble on and the government is struggling to stem the flood of gamblers crossing the border into Cambodia.

For years, Vietnamese media has retold stories of unlucky gamblers falling victim to loansharking, kidnapping and torture in Cambodia’s border casinos. On Monday, the Cambodia Daily reported the arrest of an employee of the Roxy Casino for detaining a gambler over an unpaid line of credit.

Our villain is Nguyen Thi Huong Pha, a female casino floor staffer at the Roxy in the Bavet special economic zone. Her victim was a 33-year-old dual Vietnamese-Australian female, held against her will in a room at the Roxy after she couldn’t repay the $10k the accused had fronted her.

The victim called her relatives in Vietnam to send money, but instead they called the Cambodian Interior Ministry. The law swooped into action, the victim was freed the same day and Ms. Thi Huong Pha was taken to Phnom Penh for questioning, although it was unclear whether she’d actually face charges.

Police chief Mao Phin Phirum said there were “many cases of detention” in Bavet and that the only unusual aspect of this case was the fact that the police became involved before the debt/ransom was paid and the victim freed. Key takeaway: it’s safer to gamble online.