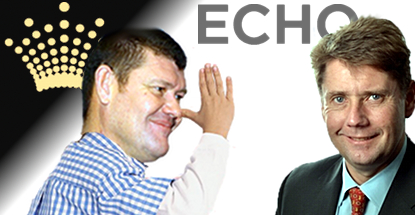 Australian casino operator Echo Entertainment saw its profit spike nearly 78% in its fiscal H1 thanks to record spending by Asian gambling whales. Normalized domestic gross revenue – which strips out the wild variance of the VIP market – in the six months ending Dec. 31 rose 12.5% to $824.4m while international VIP revenue rose 96.7% to $332.2m. Earnings rose 31.5% to $261.4m and net profit after tax hit $112.6m.

Echo CEO Matt Bekier (pictured on the right) credited Echo’s flagship Sydney property The Star for bringing in the bacon. The Star’s normalized revenue was up 38.8% to $820m while earnings rose 54% to $136m. The property is finally living up to the performance envisioned when the company completed its $870m refurbishment of The Star in late 2011. Echo’s Queensland casinos added revenue of $340m (+8.6%) and earnings of $78.1m (+19.1%).

While VIPs have drastically reduced their spending in Macau, VIP turnover at Echo’s properties rose 97.2% to a record $23.2b in H1. Sadly, win rate fell to 1.33% from 1.41% in the same period the previous year, but VIP overdue loan markers fell from $40.9m to $21.4m, which Echo credits to strong credit risk management and collections.

Looking forward, Echo says H2 has carried on where H1 left off. Priorities for H2 include expanding the Jupiters Gold Coast property and convincing the Queensland government to award Echo the right to develop the Queen’s Wharf Brisbane project.

PACKER PISSED AT SYDNEY POLS
Echo’s competition for the Brisbane casino derby is rival Crown Resorts, which is also scheduled to end The Star’s monopoly in Sydney come 2019. That is, assuming the local government gets around to granting planning approval on the $2b Crown Sydney project. Speaking at this week’s opening of the new City of Dreams Manila, Crown boss James Packer (pictured left) said he no longer views 2019 as a viable opening date unless the Barangaroo Delivery Authority (BDA) and the Lend Lease property developer learn to make nice.

Lend Lease won a profit-sharing contract dispute with the BDA last August but unspecified outstanding issues have prevented a permanent resolution. Despite Packer claiming that there was “nothing more important to me than Crown Sydney,” Packer declined to offer specifics on the nature of the BDA/Lend Lease dispute, saying he was “not in the middle of it.” Packer hasn’t been shy about publicly sharing his disdain for government regulation of the gaming sector in recent months.

Packer took out some of his frustration on Echo, calling it a “lazy company” that relied too much on its monopoly licenses. (They’re also ugly and their momma dresses them funny.) Packer said he was proud that Crown’s interest in the Brisbane license had “played a role in getting our competitor to try harder.”