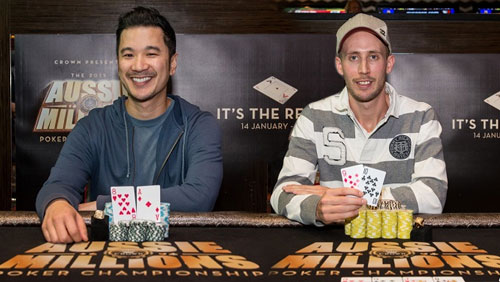 Two more events to catch up on as Nam Le defeats He Chang to win the Tournament of Champions event, and the Norwegian Mikal Blomlie defeats Sammy Lucisano to take the honors in the No-Limit Hold’em/Pot Limit Omaha Rotation event.

When the Champions League was first introduced into the football calendar I thought it was a dumb title for the competition. It’s turned out to be the most prestigious club competition in the world, but it hardly a tournament comprised entirely of champions now is it?

I guess this is my problem with the Aussie Millions Event #13: $1,150 Tournament of Champions, in as much as the eventual champion, wasn’t a champion before he became a champion.

Nam Le and He Chang, two players who have never won an Aussie Millions gold ring, were the final two players from a field of 115 players. Only the former Aussie Millions Main Event winners were given the opportunity to participate for free – hence the name. But I don’t like it. The fact that a Tournament of Champions winner is not a former champion takes some of the sugar coating dust off for me.

The pair agreed an ICM chop no sooner had Takaya Yamashita been eliminated in third place. The heads-up play then continued for a further 60-minutes before the final hand played out as follows.

Nam Le raised from the button, He Chang three-bet and Le called. The flop was [Ac] [Qh] [6d], Chang c-bet to 55,000, and Le called. The turn was the [2c] and once again the action went bet-call. The river was the [Qc], Chang checked, Le moved all-in, and Chang made the call. It was [Ah] [6h] for Chang – who had flopped two pair – but the [Ad] [8h] of Le ensured he was crowned champion, after the pairing of the queen brought his eight into play as the higher kicker.

Norway is having a decent showing, at this years Aussie Millions, and they have Mikal Blomlie to thank for that.

He is on a great run. Not only was he the winner of the inaugural TonyBet Open Face Chinese Pineapple World Championships in December, but he also finished fourth in Event #3: 8-Game Mixed a few days ago.

Blomlie had to wade through 89-players on his way to erasing that particular day of disappointment, and he did so by disposing of Sammy Lucisano in heads-up action.

Both players started heads-up with almost identical chip stacks, after Lucisano eliminated another player who is having a wonderful Aussie Millions, Hiroaki Harada. The young American will be disappointed with his third place finish, but after also finishing runner-up to Daniel Rudd in Event #2: Shotclock Shootout he can be sleep soundly at night knowing his game is top notch.

The final hand of heads-up came in a round of NLHE. Blomlie raised to 16,000 from the button and Lucisano called. The flop was [9h] [9s] [6s] and the pair got it in with Blomlie’s trip nines dominating the pocket deuces of his appointment.

The trips stayed true, and Blomlie was taking the first 2015 gold ring back to Scandinavia.