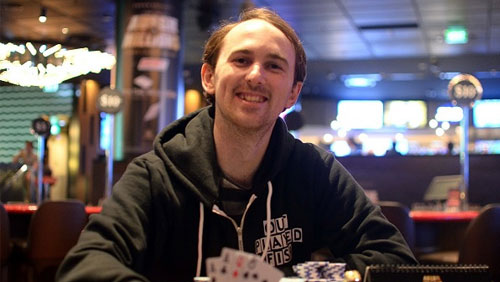 It was a case of sixth time lucky for Oliver Gill. The Australian finally managing to snag an Aussie Millions gold ring after falling short during his previous five side event final table appearances.

Only 46 players turned up for the event, and at the end of Day 1 there were five players remaining in the contest, with the Brighton FC Chairman, Tony Bloom, leading the way.

It was a cracking final table. Final table chip leader Bloom sat down with over $1.6m in previous cashes in the Aussie Millions, including two runner-up finishes in the $100,000 Challenge (losing to David Steicke in 2009 & Sam Trickett in 2011).

Trying to pull the tail of The Lizard were four players who all had an interesting story to boot. Jonas Mackoff came into the final table in fine form. The Canadian finished fourth in the €1,100 EUREKA Main Event in Prague, and bagged a side event victory at the EPT/UKIPT London Festival in October, but he could only take fifth in this one.

Mikal Blomlie hit the headlines in 2013 when he turned a World Championships of Online Poker (WCOOP) Leaderboard victory into a 10th place finish at the PokerStars Caribbean Adventure (PCA) Main Event for £120,000. He also won the first-ever TonyBet Open Face Chinese Pineapple World Championships in Prague at the end of the year. The Norwegian finished fourth.

According to the PokerAsiaPacific live reporting blog the three handed action between Sam Khouiss, Oliver Gill and Bloom lasted nine hours before Bloom got a little lucky in a hand of Seven Card Stud to cripple Khouiss – he would later feel the axe in a hand of Pot-Limit Omaha (PLO) versus Gill.

It was another fine performance for Khouiss, who was a revelation at the World Series of Poker Asia Pacific (WSOP-APAC) event in October, where he finished sixth in the $5k 8-Game event, fifth in the $25k NLHE High Roller and second in the $1,650 8-Game Dealers Choice.

The Khouiss exit saw Gill squaring off against Bloom with a 2:1 chip advantage and he would turn that into victory after a touch of fortune. The pair got it in on a flop of [5s] [4d] [2c]. Bloom was ahead with [7d] [6d] [5d] [2h], for two pair and the straight-draw, and Gill was looking for a little bit of help with [Ac] [As] [Qd] [6s] for the over pair. The [7h] on the turn didn’t produce that little bit of help, but the [Ad] on the river did. A set of aces handing Gill his first gold ring.

“It feels weird to win with a suckout, but meh, I’ll take it!” Gill told PokerAsiaPacific after his win.