Home / Poker / Aussie Millions Round Up – Titles for Soyza and Kemp 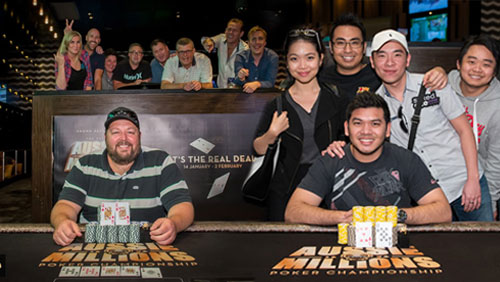 A couple of Aussie Millions events to catch up on including an Accumulator victory for Malaysia’s Michael Soyza, and a Bounty victory for the Australian Jai Kemp.

As the 2015 Aussie Millions reaches its midway point we have two more events to catch up on.

The first is Event #6: $1,150 No-Limit Hold’em (NLHE) Accumulator, and the gold ring has headed to Malaysia, after Michael Soyza won the first title of his career, overcoming the German Rainer Kempe, in heads-up action.

Davies (7th) and Benson (6th) would bow out early, and a four-way chop was agreed after Huy Pham was eliminated in fifth place. Soyza locked up $120,000, Kempe $76,272, Lettau $69,319 and Liao $59,336. No sooner has hands been shook and we were heads-up. Soyza eliminating both Lettau and Liao after flopping two pair, versus top pair, versus gutterball and flush draw. Everyone missed, Soyza took a 3:1 chip lead into the heads-up clash against the young German, and it wasn’t much longer before he owned every chip on the table.

311 entrants in this one, and the star attraction at the final table was the former WSOP Main Event third place finisher Joseph Cheong. He may have over $10m in live tournament earnings on his record, but he could only add $17,500 to that total after a disappointing seventh place finish.

Kemp turned down a three-handed deal before agreeing to chop $83,200 each, with Lee, leaving $10k to play for. The heads-up chips were fairly even, and the final hand would see KQ v 77 with a King on the flop and turn handing the victory to the popular Australian.